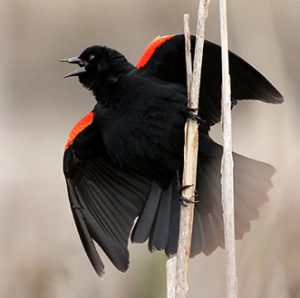 How can we tune ourselves to the music that surrounds us? How can we bear the sorrow of its silencing? Where do we turn, when words are not enough to express the urgency of action to save the songs?

Each video, just a few minutes long, is an original composition of words and music in honor of a threatened or beloved animal. For example, Robin Kimmerer reads a passage about seabirds, with a string duet. Lauret Savoy reads about sage grouse, accompanied by Mark Weaver playing tuba. Aimee Nezhukumatathil reads from an essay about meadowlarks, with an original flute composition by Jane Rigler.

Kathleen Dean Moore is a writer, moral philosopher, and environmental thought-leader, devoted to the defense of the lovely, reeling world. As a writer, Moore first came to public attention with award-winning books of essays that celebrate and explore the wet, wild world of rivers, islands, and tidal shores - Riverwalking, Holdfast, Pine Island Paradox, and Wild Comfort. Her first climate ethics book, Moral Ground: Ethical Action for a Planet in Peril (co-edited with Michael P. Nelson, foreword by Desmond Tutu) gathered testimony from the world's moral leaders about humanity’s obligation to the future. In 2016, Moore published Great Tide Rising: Finding Clarity and Moral Courage in a Time of Planetary Change, and a novel, Piano Tide, that Bill McKibben described as “savagely funny and deeply insightful.” Moore’s essays have appeared in magazines such as High Country News, Orion, Discover, Audubon, Utne Reader, Earth Island Journal, and the New York Times Magazine.

Hank Lentfer is a sound recordist, naturalist, and writer (Faith of Cranes, Raven's Witness) who lives in Gustavus, Alaska. He and his friend Richard Nelson created a sound library for Glacier Bay National Park, recording sounds from wrens to whales. Spring mornings he’ll likely be out recording the dawn chorus of songbirds. Fall afternoons he’s likely to be digging spuds or hunting deer. And during winter, when morning and afternoon get really close together and the animals aren’t making too much noise and the weather is lousy, he sometimes writes. Lentfer is also a woodworker specializing in coffins and urns for any of his neighbors who (sadly) have need for one. In his spare time, he works for the Nature Conservancy managing a nature preserve.

Kyra Epstein is a writer and herbalist, and the program coordinator for The New School at Commonweal. Over the years, she’s written about sustainable living, green buildings, energy efficiency and climate change for non-profits, government laboratories, and newspapers and magazines. She studied plant medicine with German alchemist and herbalist Suzanne Fisher Rizzi and American herbalist Stephen Buhner, and has written about plants and their personalities on her blog site.