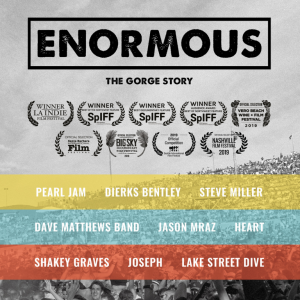 Chronicling its journey from unlikely beginnings,
Enormous: The Gorge Story weaves together personal stories from music legends Dave Matthews, Mike McCready (Pearl Jam), Jason Mraz, Dierks Bentley, and Steve Miller, with the emotional narratives of audience members who have built their lives around the venue.

These stories reveal how a family-owned winery – with a makeshift plywood stage – ascended to become “The Gorge,” a Billboard, Pollstar and ACM winning music venue.

In addition to the full-length film, this one-night-only screening will feature exclusive, never-before-seen interviews with Hozier, Phantogram, and Portugal. The Man. The night will also include a world premiere of The Enormisodes – five mini-documentaries about The Gorge – along with a blooper reel featuring Dave Matthews, Jason Mraz, and Pearl Jam’s Mike McCready, among others.