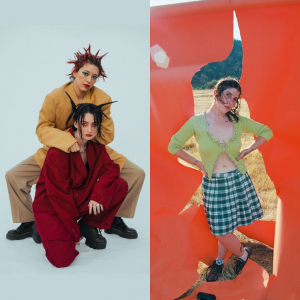 Burning deep in Girl Friday's music is an unquenchable will to survive.

The LA-based band don’t blunt the impact of the themes they work through in their ferocious, knotty rock songs, but they don’t let the more harrowing aspects of being alive and young in the 21st century daunt them, either.

The seeds of the band were first planted when guitarist Vera Ellen walked into a friend’s house at UCLA and saw Libby Hsieh playing bass on the couch. Drawn by her unique playing style, Ellen introduced herself, and the two musicians immediately bonded. After a year of playing together, they decided to grow their collaboration into a full band.

Taking cues from longtime boundary-pushers Sonic Youth, Girl Friday depart from traditional song structures, favoring the rush of jarring turns over the safety of well-defined pop taxonomy. Looking to queer provocateurs like Placebo, they cherish the frisson of incongruous musical elements soldered together: “really dark, heavy things mashed up with quite beautiful things, whether that be a distorted guitar line and a sentimental vocal or vice versa,” as Ellen puts it.

Alone, we suffer under the weight of everything designed to keep us down. Together, we stand a fighting chance. Girl Friday place their hope squarely on that chance — on what we can do when we show up for each other, where we can go when we’ve got each other’s backs.

Cryogeyser is making dreamy, dark, vocal-forward music dealing with the themes of truth, transcendence, and longing. They are a three-piece rock band out of Los Angeles, fronted and formed by Shawn Marom on guitar and vox and Hunter Martinez on bass in early 2018. Since then, the project has recorded three albums, and has welcomed new bass player Will Kraus and drummer Nich Santana.

Cryogeyer’s most recent release, Love is Land, produced by Stella Mozgawa earlier in 2020, is part of a double-album, Love is Land/timetetheredtogether, produced by Jack Shirley, set to release on Terrible Records on October 29th.