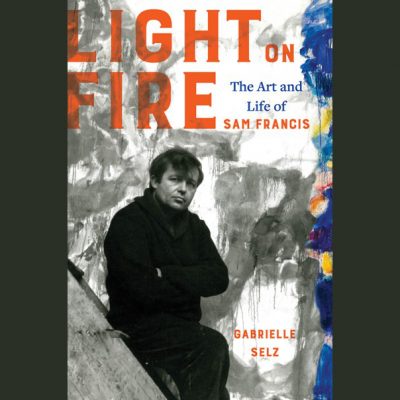 LOCAL>> Gabrielle Selz – Light on Fire: The Art and Life of Sam Francis

The Mesa Refuge presents Gabrielle Selz and John Sneed for a conversation about the new biography, Light on Fire: The Art and Life of Sam Francis (UC Press), the first in-depth biography of the legendary American abstract painter who broke all the rules in his personal and artistic life.

Light on Fire: The Art and Life of Sam Francis is the first comprehensive biography of Sam Francis, one of the most important American abstract artists of the twentieth century.

Based on Gabrielle Selz’s unprecedented access to Francis’s files, as well as private correspondence and hundreds of interviews, this book traces the extraordinary and ultimately tragic journey of a complex and charismatic artist who first learned to paint as a former air-corps pilot encased for three years in a full-body cast.

While still a young man, Francis saw his color-saturated paintings fetch the highest prices of any living artist. His restless desire resulted in five marriages and homes on three continents; his entrepreneurial spirit led to founding a museum, a publishing company, a reforestation program and several nonprofits.

Light on Fire captures the art, life, personality, and talent of a man whom the art historian and museum director William C. Agee described as a rare artist participating in the “visionary reconstruction of art history,” defying creative boundaries among the likes of Jackson Pollock, Mark Rothko, and Willem de Kooning.

With settings from World War II San Francisco to postwar Paris, New York, Tokyo, and Los Angeles, Selz crafts an intimate portrait of a man who sought to resolve in art the contradictions he couldn’t resolve in life.

Gabrielle Selz is the award-winning author of Unstill Life: A Daughter’s Memoir of Art and Love in the Age of Abstraction (2014) and Light on Fire: The Art and Live of Sam Francis (2021). Her essays and art reviews have appeared in The New Yorker, The New York Times, The Los Angeles Times, Hyperallergic, The Rumpus, and The Huffington Post among others. She makes her home in Oakland, CA.

John Seed is a professor emeritus of Art and Art History at Mt. San Jacinto College who has written about art and artists for Arts of Asia, The Anderson Collection at Stanford University, The HuffingtonPost and Hyperallergic. He has served on the board of the Sam Francis Foundation since 2013 and is the author of Disrupted Realism: Paintings for a Distracted World.