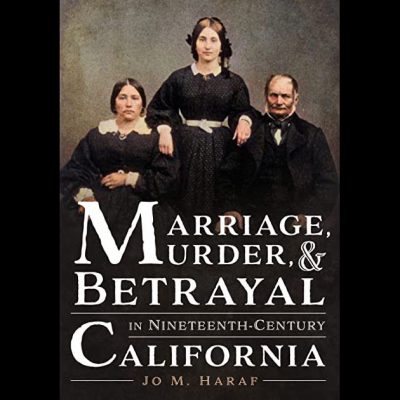 Left for dead on Monterey’s beach in 1832, Scotsman James Black survived to build a Marin county cattle and dairy empire. His privileged life ended in addiction after his wife’s death at the hand of their son-in-law.

Black’s daughter fought her stepmother for four years and across two counties for a fair portion of her father’s $15 million dollar estate.

Join the Black family and their contemporaries as California evolves from a sea-otter-hunting Spanish colony to a Mexican territory beset by invading Russians and finally into an American state where wealth and influence come to those who embrace the new west’s opportunities and risks.

A past volunteer at the Marin History Museum, Jo Haraf edited and contributed to MHM's book Journal Across the Plains, the Museum's Newsletter and the Bulletin. After twenty-five years in Marin, she now lives on Florida's Sun Coast with her husband and a scruffy terrier whose adoration sustained her through revisions and rejections.