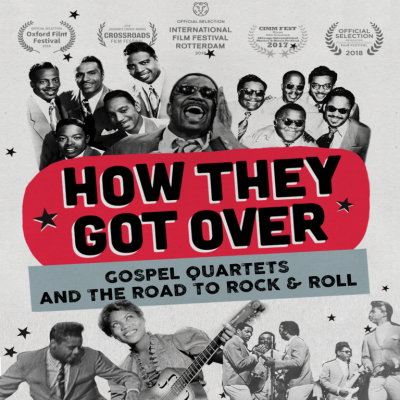 How They Got Over tells how African American gospel quartet music became a primary source of what would be known as rock and roll.

Beginning in the 1920s, black singers across the country took to the highways as the new technology of radio and records made it possible to reach a wider.  Intense competition brought new ways to move their audiences, first with guitars, later with full bands, then with a performance style that would inspire Mick Jagger and a host of other rock and rollers.

Their music was infectious, wrecking many a house on the chittlin’ circuit, then at the Apollo and major auditoriums across the country in the late 1940s and 50s.   The success of gospel quartets inspired record companies to form “doo-wop” groups that performed a secular form of quartet music, and to entice gospel singers like Sam Cooke, Lou Rawls and Wilson Pickett to cross over to greater fame.

Some of the greatest names in quartet music are interviewed in the film, and most have since passed on.  They give vivid first person accounts of how they “got over” in their performances, shouting, bending over backwards, dancing, jumping off the stage – what came to be known as “gospel drama.”

How They Got Over celebrates the spirit of gospel performers and how it helped usher in a musical revolution that changed the world forever.