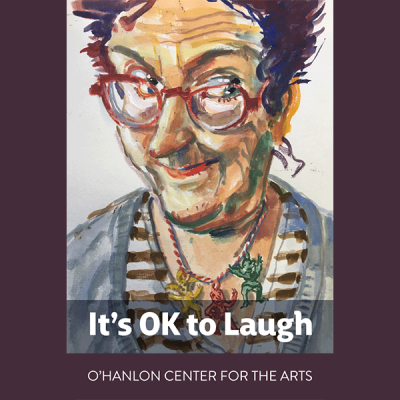 Online exhibition on the theme of Humor in Art

As a child I had two jokes from Mad Magazine on my wall that both confused and entertained me “all that glitters is not gold said the camel urinating in the moonlight” and “Rome wasn’t built in a day, it just looks that way”. They both are visual puns that question the literal.

It is dangerous to make art that is humorous. People may not take you seriously. When humor works it often rides a precarious line between the sublime and the downright silly and is often not funny at all.

The humor in my paintings comes about unconsciously… it is always there in some form. Humor is the camouflage for the ‘real’ subject and a catalyst or bridge to the darker, more disquieting side of the story. Major influences have been Jacques Tati, Lucille Ball, George Cruikshank and Marcel Carne’s les Enfants du Paradis.”

JUROR:  For over four decades, M. Louise Stanley has utilized narrative motifs culled from early Western Art History’s primary subjects – Greek mythology and Christianity – to create scathingly humorous indictments of gender inequity, sexual politics, economic disparity, and everyday instances of bad behavior. Stanley’s pointed criticisms are couched in her absurdist take on storytelling and figuration. Her affinity for satire, visual puns, and the outrageous is rooted in her time as a student at the California College of Arts and Crafts (now California College of the Arts), BFA 1967, MFA 1969. Stanley has been awarded grants from the National Endowment for the Arts (2), Fleishhacker Foundation, Adolph and Esther Gottlieb Foundation (2), Pollock-Krasner Foundation, and John Simon Guggenheim Fellowship. She resides in the Emeryville Artist’s Co-op in the SF, Bay Area and has taught for 20 years at Berkeley City College.

Contemporary, expressionistic, abstract, exploratory, and/or experimental entries encouraged.  O’Hanlon Center for the Arts emphasizes the creative process and the continued pursuit of meaning and authenticity through observation, exploration, and experimentation.