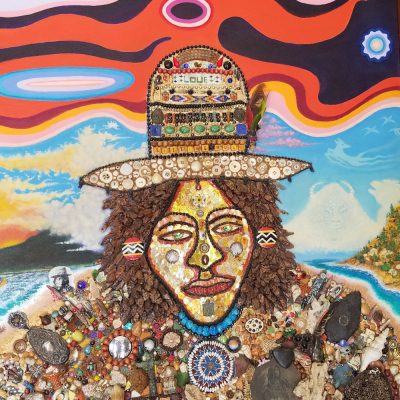 Dickens 44 has been creating innovative works of art since the 1960s. His art is vibrant, colorful, crazy, and unique, all with a nod to the environment.

He coined the term “Recycledelic” referring to his “glue art” mosaic and fusion pieces created from thousands of various recycled, found, and salvaged objects he has collected, scavenged, and assembled for decades.

His artworks often feature old telephones, bottle caps, toys, seeds, computer parts, and just about anything else he can get his hands on. His works are intricate, ornate, and precisely detailed to say the least.

This exhibition includes mosaic works of art created with found objects glued to board or canvas; fusion works which combine mosaic and painting together; and visionary acrylic paintings framed in wood or bamboo including some with fusion frames that utilize found objects.

Many of his works are influenced by his more than two decades of living in the Philippines and Thailand and in Central America, and all his works respond to the fragility of the environment by literally turning trash into artistic treasure.

His glue art creations made him a counterculture celebrity in the 1960s and ’70s throughout Marin County and the Bay Area. Dickens gained the most attention in the 1970s as the creator of a kitsch-encrusted 1961 Ford Falcon with toys, trash, and other found objects glued over every square inch — it was one of the first art cars in the Bay Area.

The son of a successful advertising agency executive, Dickens’ parents gave him 44 as a middle name, because he was born 44 minutes after 4 o’clock on February 13, 44 days after the new year. His first art exhibit was in the Haight Ashbury in the late 1960s and his work has been exhibited worldwide ever since. Early in his career, Dickens was recognized nationally by being awarded a grant from National Endowment for the Arts.

Dickens 44 can be categorized as a true Outsider Artist and this retrospective exhibition celebrates his life’s work as an artist, environmentalist, storyteller, and Recycledelic master.