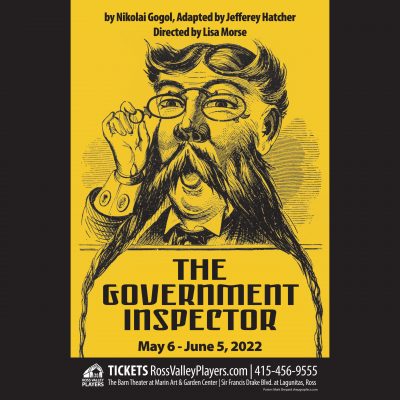 Gogol’s classic 19th Century comedy of errors and mistaken identity has been updated for today’s audiences by Jeffrey Hatcher, not unlike a Marx Brothers comedy.

When local officials in a small Russian town learn that an undercover government official is coming, the whole village is sent into a world of panic, hasty cover ups and greed.

A low-level clerk from St. Petersburg, with his own larcenous bent, is misidentified as the inspector.

Fearing the visit will uncover the town’s well-established pattern of corruption, local officials from the Mayor down set off in a flurry of activity to cover up their various histories of public misdeeds.

The result is a frantic and hilarious merry-go-round of corruption, lust and certifiable self-delusion. An evening of pure fun.

PROOF OF VACCINATION REQUIRED FOR ENTRY

Thursday Night Preview, May 5: pay what you will