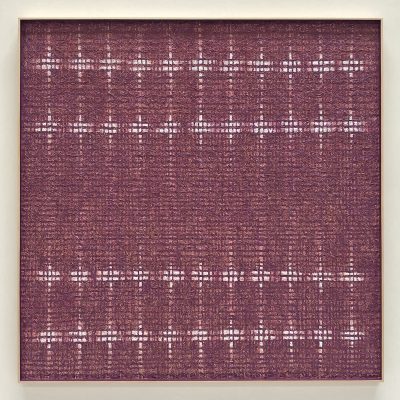 Diane DallasKidd is a Marin-based artist whose work addresses the boundaries of craft and contemporary art.

Using the language of traditional textile techniques as a foundation, DallasKidd’s work is both exploration and meditation on the primal act of making things.

For Pattern In Relief, her second solo show at the gallery, DallasKidd has made a new body of work from her ongoing Roots and Tracing Waves series as well as developed a new series entitled Kasuri.

Based on the Japanese form of Ikat, Kasuri is an ancient weaving and dye technique that uses a resistance method applied directly to yarns in order to create woven patterns.

Her surface substrate begins as a chaotic network of linen yarn applied to wood panels in indiscriminate clumps and is then gessoed into a flat but topographically rough surface. From here she applies paint directly onto the thread using a tonal palette that creates the illusion of a woven grid, while her threads remain in disarray just underneath the paint’s surface.

Inspired by hand-woven materials from her mother's country of origin, these works are a continuation of her inquiry into the evocative nature of fabric and the deep relationship between humans, textiles, comfort and care.

DallasKidd was born and raised in San Francisco and graduated from San Francisco State University with a BFA in Textile Art. She traveled to Japan to continue studies under Tsuyoshi Kuno, a fourth generation master dyer who adapted centuries-old dyeing techniques to create new material for avant-garde designers and high end theatrical productions. She has exhibited at the Marin Museum of Contemporary Art, Root Division and galleries throughout the United States.