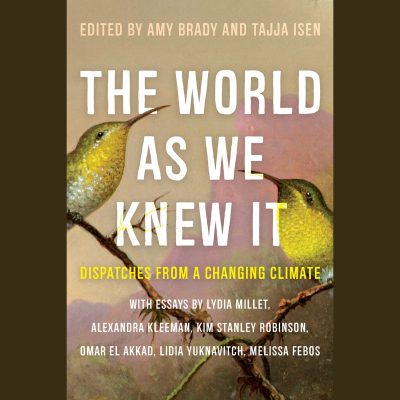 Co-editors are joined by contributors to their climate anthology

Amy Brady and Tajja Isen are joined by Lidia Yuknavitch and Pitchaya Sudbanthad, contributors to their new climate anthology, The World as We Knew It (Catapult).

“Spanning the globe, from Antarctica to Qatar to Queensland, The World As We Knew It sometimes has the stark, clear sound of a fire lookout announcing flames, and in other moments, it has the intimate pace of a journal. We need both these registers and more, this important book reveals: clarity in urgency, depth in observation, if we stand a chance at making sense of the gargantuan changes we set in motion and our living through as a species.” —John Freeman, author of The Park and editor of Tales of Two Planet

In this riveting anthology, leading literary writers reflect on how climate change has altered their lives, revealing the personal and haunting consequences of this global threat.

In the opening essay, National Book Award finalist Lydia Millet mourns the end of the Saguaro cacti in her Arizona backyard due to drought.

Later, Omar El Akkad contemplates how the rise of temperatures in the Middle East is destroying his home and the wellspring of his art.

Gabrielle Bellot reflects on how a bizarre lionfish invasion devastated the coral reef near her home in the Caribbean—a precursor to even stranger events to come.

Traveling through Nebraska, Terese Svoboda witnesses cougars running across highways and showing up in kindergartens.

As the stories unfold—from Antarctica to Australia, New Hampshire to New York—an intimate portrait of a climate-changed world emerges, captured by writers whose lives jostle against incongruous memories of familiar places that have been transformed in startling ways.

Tajja Isen is the author of Some of My Best Friends: Essays on Lip Service. She is an editor for Catapult Magazine and the former digital editor at The Walrus. Also a voice actor, Tajja can be heard on such animated shows as The Berenstain Bears, Atomic Betty, and Go Dog Go, among others.

Amy Brady is the Executive Director of Orion. She is also the author of a cultural history of ice in America and the former Editor-in-Chief of the Chicago Review of Books. She holds a PhD in literature from the University of Massachusetts Amherst and has won writing and research awards from the National Science Foundation, the Bread Loaf Environmental Writers Conference, and the Library of Congress.

Pitchaya Sudbanthad is the author of Bangkok Wakes to Rain, a New York Times and Washington Post notable book of the year.

Lidia Yuknavitch is the nationally bestselling author of the novels The Book of Joan, The Small Backs of Children, and Dora: A Headcase, and of the memoir The Chronology of Water. She is the recipient of two Oregon Book Awards and has been a finalist for the Brooklyn Public Library Literary Prize and the PEN Center USA Creative Nonfiction Award. Her book The Misfit's Manifesto is based on her TED Talk, "On the Beauty of Being a Misfit," which has now received over 4 million views. Her forthcoming novel, Thrust arrives June 2022. She lives in Oregon, near the sea. She is a very good swimmer.