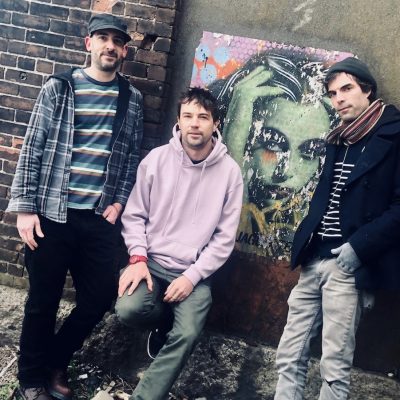 The Slip – with Big Light

Formed in Boston in 1995, The Slip has earned a legacy as one of the most daring and dynamic improvisational rock trios to come out of the Northeast.

With Brothers Brad and Andrew Barr (guitar and drums) and bassist Marc Friedman, the band Is known for its telepathic and hyper-kinetic approach to creating living, breathing moments on stage.

Despite the fact that Slip sightings have become increasingly rare over the last decade, they have never stopped making music together.

Big Light came along at an auspicious time – the early ’00s. San Francisco’s music community was vibrant. Artists could still eek out a living in San Francisco.

The 3rd wave of gentrification that would ultimately force many a band to pack up and leave the Bay Area had yet to fully materialize. In that sense, Big Light lucked out. The band’s early years were spent playing just about every club in town.

There was no shortage of opportunities for new talent, and it wasn’t long before they established themselves as the creative force that would go on to record three albums, tour the country, and earn a reputation as one of SF’s most original rock n’ roll acts.

The fact that 13 years later, Big Light is still here making new music, is a small miracle in itself. The band has weathered a breakup, lineup shifts, and most critically, SF’s cultural drought.

Despite this turmoil, the members of Big Light have committed themselves to stay in the game for the sake of their friendships, their fans, and the city they still call home.

In a time where more music venues are closing than opening, and more and more bands are packing it up than forming, Big Light intends to hold the line and remain what they’ve always been – a San Francisco rock band.