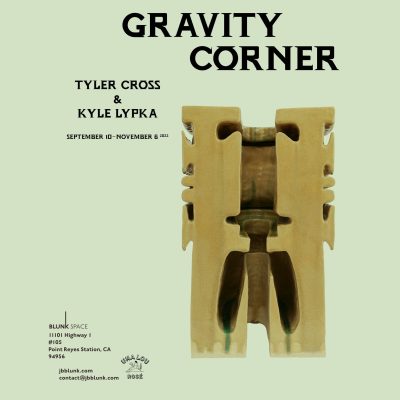 Collaborators with a shared practice focused on ceramic vessels

In 2016, the artists began a shared practice with the simple desire to spend time together making objects. The main objects of that desire, they explain, are ceramic vessels. Each tethered to gravity, these pieces transit themes of difference, touch and transmutation.

Using drawing as a gesture of departure, Cross and Lypka interpret flatness into form. Line drawings on gridded paper developed by Cross act as glyphs or rough architectural plans for the sculptures. Lypka then interprets and expands upon the formal structure of the drawing, stewarding graphite outlines toward an uncertain three-dimensionality in clay.

Handbuilt, the resulting forms are comprised of hard lines and blind curves made by touch and the human hand. Oftentimes, the final product greatly departs from its original proposal—a mirror image of two shapes, twinning on the page.

Kyle Lypka states his initial pursuit of mirroring or doubling forms has led him towards the creation of a third entity.

This third entity manifests in negative space or the body of the sculpture itself. He explains, “It's pretty basic but it has powerful results, any time you let two things interact they'll create something new. That's why the third entity aspect of the work is often the best part and it's also why the collaboration itself has been so fun and rewarding. I just want to get something to show up in the room that's outside of us.”

Within their shared artistic practice is an act of submission—to gravity, heat, weight and chance, and ultimately to one another.

Join us for the opening reception Saturday, September 10, 2–5pm.
The exhibition runs from September 10–November 6, 2022.