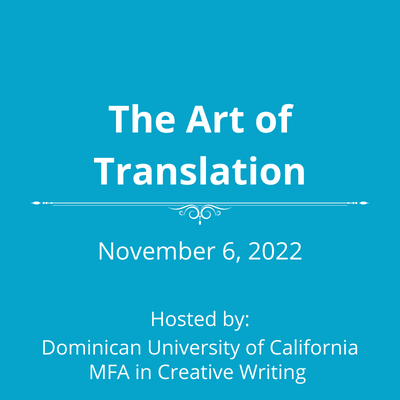 The Art of Translation

Join us for an evening focused on the joys and challenges of writing across languages.

This event offers a wide variety of works both famous and brand new that illuminate the art of communication across borders. Presented by Sixteen Rivers Press in partnership with Dominican University of California's Creative Writing MFA Program.

Brenda Hillman has authored several poetry collections, the most recent of which is In a Few Minutes Until Later (Wesleyan University Press, 2022). Her honors include awards and fellowships from the Guggenheim Foundation, the National Endowment for the Arts, and the Poetry Society of America. Hillman was named a Chancellor of the Academy of American Poets in 2016. She is Professor Emerita at Saint Mary’s College and the director of the poetry week at the Community of Writers in Olympic Valley, CA.

Matthew Zapruder is the author of Why Poetry (Ecco/Harper Collins, 2017), a book of prose about poetry, as well as the poetry collections Sun Bear, The Pajamaist, and Come On All You Ghosts, all from Copper Canyon Press. His honors include the May Sarton poetry award from the American Academy of Arts and Sciences, the William Carlos Williams Award from the Poetry Society of America, a Lannan Literary Fellowship, and a Guggenheim Fellowship. He co-edits Wave Books, has served a as poetry editor for the New York Times Magazine, and co-translated, with historian Radu Ioanid, Romanian poet Eugen Jebeleanu’s last collection, Secret Weapon.

Terry Ehret is one of the founders of Sixteen Rivers Press. Awards for her poetry collections—Lost Body and Translations from the Human Language—include the National Poetry Series, the Commonwealth Club of California Book Award, and the Nimrod/Hardman Pablo Neruda Poetry Prize. Her initial translation work on the poetry of Ulalume Gonzalez de Leon won a Northern California Book Award.  Lucky Break is her third book of poems.

Marjorie Agosín is a Chilean American poet who writes in Spanish, her native language. She is a human rights activist and the Andrew Mellon professor of the Humanities at Wellesley College. She has received the Gabriela Mistral Medal—the Chilean government’s Medal of Honor for Lifetime Achievement—a Fulbright fellowship, a Jasper Whiting award for travel, and the United Nations Leadership Award for Human Rights.

Celeste Kostopulos-Cooperman serves as Suffolk University’s Director of the Latin American and Caribbean Studies Program. Her areas of concentration include contemporary Latin American prose and poetry, women's literature, Latino literature, and translation theory. Her translations of Latin American women's poetry have appeared in many journals and magazines including Harper's, Agni, the Michigan Quarterly Review, and the Massachusetts Review. She is the recipient of the Outstanding Translation Award from The American Literary Translations Association for Circles of Madness / Circulos de locura: Las madres de la Plaza de Mayo (New York: White Pine Press, 1992.)

Nancy J. Morales is a co-translator, with John Johnson and Terry Ehret, of Ulalume González de León's Plagios/Plagiarisms, Volume One (Sixteen Rivers Press, 2020). Nancy J. Morales earned her bachelor's degree from Rutgers College, a Masters in Teaching English as a Second Language from Adelphi University, and a doctorate in education from Teachers College at Columbia University. She has taught at Dominican University, College of Marin, and Sonoma State University. Currently she is a board member for the Northern California Chapter of the Fulbright Alumni Association, and teaches Spanish to private clients.

Registration is required. This creative writing event is a service to the public and there is no charge for participating. Dominican University of California is a nonprofit institution. To make a donation to the MFA Scholarship Fund visit our site here.