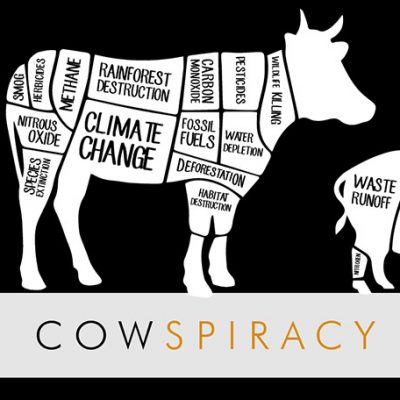 Animal agriculture is one of the leading causes of deforestation, water consumption and pollution, and is responsible for more greenhouse gases than the transportation industry.

This film explores these devastating impacts on our planet as well as the policies of environmental concerns, and offers a path to global sustainability for a growing population.

Maybe the key to climate change is pigs, chickens and cows? And maybe change starts on our plates with a plant-based diet?

The film, which was directed by Kip Andersen and Keegan Kuhn, features Michael Pollan, Dr.
Richard Oppenlander, Dr. Will Tuttle, Howard Lyman, and Will Potter.

As eye opening as Blackfish and as inspiring as An Inconvenient Truth, this shocking yet humorous documentary reveals the absolutely devastating environmental impact large scale factory farming has on our planet, and offers a path to global sustainability for a growing population.

At the Callippe Theater Ballroom at Cavallo Point Lodge, Sausalito.

The event starts with a reception at 5 p.m. in the Callippe Theater foyer, followed by the film at 6 pm. An after-film town hall discussion follows at 7:30 pm. Tickets include the reception with beer, wine and appetizers.