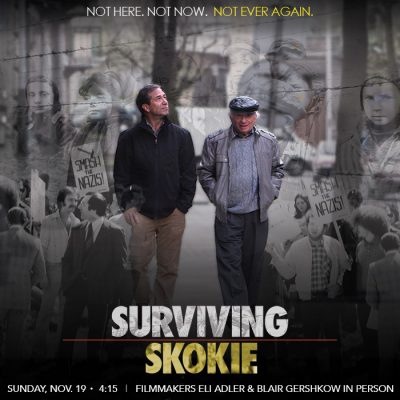 Before Charlottesville there was Skokie…Filmmakers Eli Adler and Blair Gershkow will present and discuss a special screening of the powerful documentary that chronicles a 1978 neo-Nazi march through a Chicago suburb .

Before Charlottesville there was Skokie…

Filmmakers Eli Adler and Blair Gershkow will present and discuss a special screening of the powerful documentary they premiered at the 2015 Mill Valley Film Festival, where it was an Audience Favorite.

The film focuses on Jack Adler, Eli’s father, a Polish immigrant and concentration camp survivor who built a life for his family in Skokie, Illinois. But the peaceful existence of hundreds of Holocaust survivors was threatened in 1978, when a neo-Nazi group announced a march through the Chicago suburb.

Using the elder Adler’s first-person perspective and fascinating historical footage, the filmmakers explore how the community united in the face of the scars and memories that were suddenly exposed.