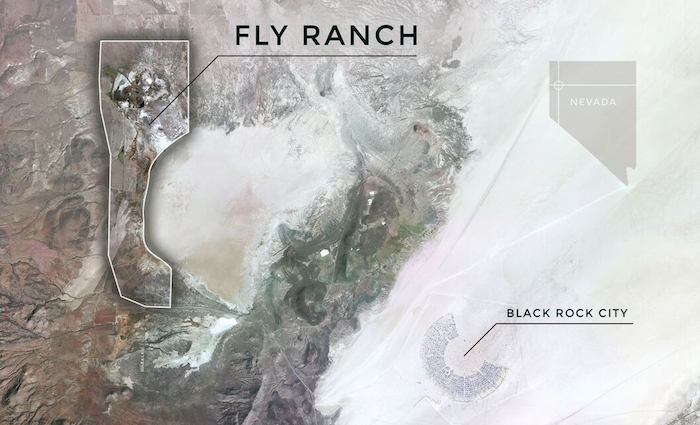 A dilapidated barn, a house, and some outbuildings sit on a semi-arid chaparral in the Black Rock Desert, 100 miles north of Reno, Nevada. The property lies 25 miles from the electric grid, dry heat…

A dilapidated barn, a house, and some outbuildings sit on a semi-arid chaparral in the Black Rock Desert, 100 miles north of Reno, Nevada. The property lies 25 miles from the electric grid, dry heat hits a 93 degree high on a summer day (60 degrees by night), and the closest neighbors are Paiute Native Americans. From this, the improvisational leadership of the Burning Man Project intends to create a year-round center for events and retreats. And they want it to be completely self-sustaining.

This 3,800-acre plot, Fly Ranch, is driving distance from the home of the Burning Man Playa, the pop-up city of 80,000 that emerges from the desert every Labor Day weekend, at least pre-COVID-19. This year, Burning Man is planning a virtual event. They are also asking their participants, and the general public, to help them generate ideas to turn the ranch into an example of sustainable living. The intent is to use off-the-grid sustainable energy, desert-friendly water use, sustainable agriculture, and what’s known as reiterative technology (for example, composting) to offer an innovative approach to shelter.

“We hope the designs (for Fly Ranch) are awe-inspiring and present a post-carbon world that can be just if not more inspiring than the one we are in. Our play space isn’t dissimilar from the future of many places if we don’t change course. We are facing down an existential crisis, and many other places may look like this one soon.”

The collective has partnered with the Land Art Generator, a Seattle based organizer of sustainable design events meant to foster a post-carbon society. Together, they’ve launched an open call-for-entry design competition, LAGI2020 Fly Ranch. Open to anyone who wishes to submit ideas; Burning Man will give $150,000 to 10 winners to build and test prototypes in 2021. The video below includes the original competition deadline. The new deadline for submission is October 31, 2020.

Burning Man has a long history of merging artistic vision with community. Burning Man began in 1986 when 35 people gathered on Baker Beach in San Francisco and ended their event by building and burning an 8-foot tall wooden figure. Pre-Covid, the event on the Playa brought together community of tens of thousands of individuals to build a temporary city of creatively themed camps and large art installations based on ten principles: radical inclusion, gifting, de-commodification, radical self-reliance, radical self-expression, communal effort, civic responsibility, leave no trace, participation, and immediacy. Marin photographer William Binzen photographed Burning Man for the early 21 years of the event, and documented some of the early art-inspired happenings on the land called Desert Siteworks.

“Let’s green our burn, and build the regenerative future of our society!” said the Facebook post of the Marin-based Burning Man camp called Hotel California when it announced the Fly Ranch competition to their local friends. Hotel California stated mission is to propagate environmentally conscious technology, art, and living. They aim to build prototype systems, open source the designs, and educate people on how to build and deploy similar systems.

Previous Land Art Generator (LAGI) competitions have generated concepts for sculptural and landscape designs that double as both art and energy generators. The Fly Ranch competition seeks out elegant solutions to solve real world problems, such as ones in Marin County.

“An elegant solution for recycling would really solve a problem for large projects. It’s great we’re recycling, but it’s tough to deal with trash at a large scale,” says Marin-based architect Ingrid Schoenlank. “Solar isn’t always inspiring to install on homes. It’s still really clunky.” She hopes to see the Fly Ranch project will make advances that can get put into building codes so real change can happen.

The design requirements for Fly Ranch will need to include ways to transport and store water on-site for Black Rock City, improving on water trucks, old pipes, and ditches.  The designs will need to harness natural resources while stewarding the land. Fly Ranch is, in fact, a vibrant environment with water as well as rich habitat. A survey has revealed 107 different plants, as well as the presence of rabbits, deer, antelope, coyotes, horses, foxes, and falcons, 41 kinds of birds including eagles, geese, swans, and pelicans.

This competition is perhaps the most ambitious yet for the Land Art Generator team, not least because it encompasses solutions for power, water, shelter, food and regenerative technology but it goes beyond ideas to fund prototypes. The competition is open to proposals through October 31, 2020. A 28-person jury (including representatives from eight indigenous communities) will decide the winners.

A book with all of the information and ideas generated by the Fly Ranch competition will detail the process, highlight projects, as well as the challenges in building the prototypes. This information will be open for anyone in Marin and beyond to access with the hope that a remote site in Nevada can become a model for land stewardship and sustainable development.

Burning Man 2020 will be a virtual event. In lieu of Black Rock City, they are encouraging Burners to create a “season of radical community” that encourages involvement in their local communities. They are looking forward to seeing how people around the world bring the spirit of Burning Man forward.