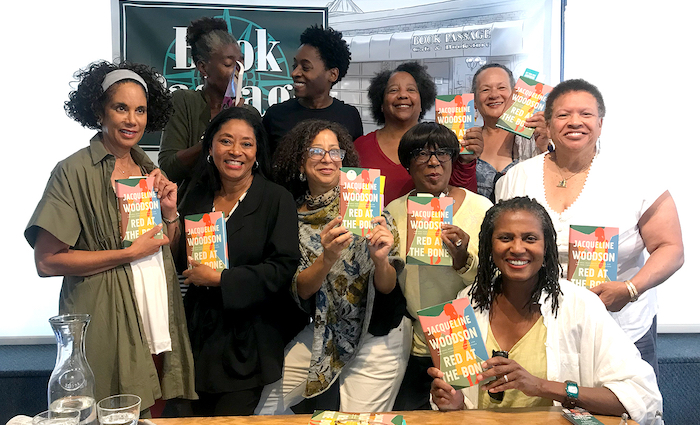 If you had told me even two years ago that I would be participating in a book club, let alone heading one up, I would have assumed you didn’t know me very well. On the…

If you had told me even two years ago that I would be participating in a book club, let alone heading one up, I would have assumed you didn’t know me very well. On the one hand, it might not seem so odd that I’d be in a book club given I work in the literary industry as a book buyer and author event host for Book Passage. On the other hand, I have always resisted joining book clubs and turned down many invites over the years to participate in them. When asked, I let well-meaning friends and colleagues know that, while I appreciate the invite, I prefer to stay in my book group of one. I want to read what I want to read (or need to read for work) at my own pace.

All that changed last fall when I was approached by my boss at Book Passage to consider organizing a chapter of The Well-Read Black Girl book group (WRBG), a book club dedicated to black writers, for our store. Founded by Glory Edem, the club strives to address inequalities and improve communities by reading and reflecting on the works while introducing a cohort of diverse writers to future generations. Although hesitant initially, I quickly relented, knowing full well that as the only person of color on staff, I was the most appropriate to do so. I soon fully embraced the task and began recruiting the few women of color from store patrons, and they invited their friends. Some of them were new acquaintances, some I often had a friendly rapport with over the years, but none of them at that time were what I would call friends. Fast forward several months, and we have gone from a membership of the original three to twelve members. I now consider all of them friends whose opinions on books and whose encouragement with personal life and professional projects are invaluable.

You may ask, “What is so remarkable about starting and growing a book club these days, especially when stats show there are five million book club members in the U.S. alone?!” It’s no small feat to have quickly launched and sustained such an endeavor given that Marin County is predominantly white people (80 percent), and less than three percent black people. Reaching out to and enlisting members of the African American and Latinx communities for WRBG, many of whom are busy moms and/or professionals, seemed an uphill battle. We did it, and I’m personally better off for it – now more than ever during a pandemic. I didn’t realize how much I needed this specific type of book group until I had it.

Before moving to the Bay Area, I had always resided in either diverse communities or predominantly black communities. Now that I live in Marin and am part of a small minority group, it takes on greater significance to join with those of similar backgrounds. Coupled with a shared passion for stories and connecting during this challenging time, the connection is especially valued. Bridget Anderson, a member of said WRBG club, sympathizes with the sentiment that a book group with a themed focus such as this is very freeing.

“Many life experiences are similar. However, people of color share the issues of being discriminated against and constantly needing to traverse the waters with caution. During our WRBG discussions, we’re able to “let our hair down” and discuss the topics without judgment or having to explain. This book club is no more limiting than in what most would deem a “traditional” book club…whose tradition, and what’s limiting?”

Beyond the collective reading and deep discussions centered around diverse writers and emerging voices, our book club has become a safe haven for communication concerning issues of race and identity. We are all understandably reeling from the death of George Floyd; a black man killed at the knee – literally – of a white police officer in Minneapolis, and the subsequent public rage and protests. Things may be relatively quiet in Marin, with smaller peaceful protests in Marin City and San Rafael than big cities. Still, black residents and the WRBG book club members feel the pain and anger expressed by the larger community worldwide.

Instead of moving forward with our scheduled June read and talk of a novel by a LatinX writer, I suggested we postpone those plans and make the space for processing emotions on the current state of affairs. As always, we may all end up sharing ideas regarding topical reading recommendations, but the focus of that day’s meeting will be how did we get to this place, and how can we get through this together. In the end – as is for most book clubs, the actual books, as wonderful and important though they may be – it’s about camaraderie, communication and community. We’re touching lives one book at a time … of late, one crisis at a time.

On the topic of race, here are some resources suggested by panelists in a panel I recently hosted called Racism in America:

From #blacklivesmatter to Black Liberation by Keeanga-Yamahtta Taylor

Invisible No More: Police Violence Against Black Women and Women of Color by Andrea Ritchie

We Live for the We by Dani McClain

We Were Eight Years in Power by Ta Nehisi Coates

Paula Farmer is an author event host and moderator for Book Passage, and chairwoman of the new Diversity and Inclusion Committee for the CALIBA (California Independent Booksellers Association). She curates special panel events for Book Passage that focus on timely social and political issues. Her background is in print and broadcast journalism.