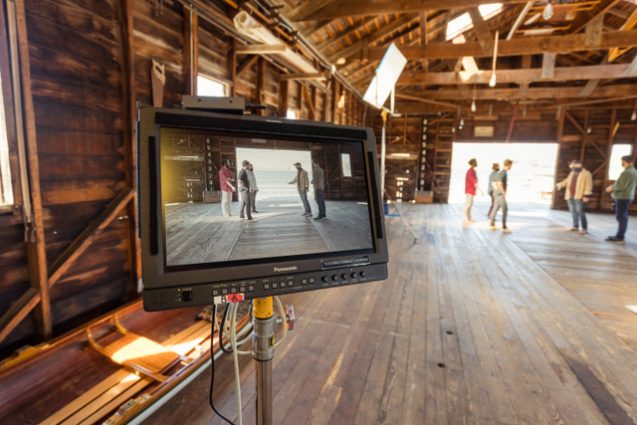 Julia Adam Dance faced a dilemma earlier this year. Founder Julia Adam, a former principal dancer with the San Francisco Ballet and now a successful choreographer, draws dancers nationally to join her dynamic performances in the natural world of Western Marin. Normally, Julia’s main performance is preceded by a sumptuous farm-to-table community meal in a spectacular outdoor setting with the expertly choreographed dance taking place under the sky near sunset.

This is one example of the challenges Marin’s dance companies like Julia Adam Dance are exploring as they find creative ways to stay viable in a pandemic.

Julia looked for other alternatives, “My partner, Aaron [Lucich] who’s also been a big producer, director, a film guy, decided we’d create a pod of dancers and do a film that we just finished shooting.”

Aaron also practices sustainable agriculture raising organic, grass-fed cattle. He explained, “The difficult part of our model is, we’re not solely an arts organization, so the combining of what we call a cultural experience around ecological sustainability with the farm identified food in agricultural environments makes us a hybrid, for profit, nonprofit. So, the dance is underwritten by donations and our ticket sales are really wrapped up in the food piece for profit side. Unfortunately, that’s all been turned on its head with COVID, so we’ve turned to creating a film.”

Julie adds, “It’s heartbreaking though, because it isn’t the same. It is just something completely different.”

Aaron agreed, “Yes, for the events you get a holistic cohesive experience with no stops or starts, it’s all one.”

Julia added, “And you’ve actually bonded over the breaking of bread and the setting opens you to the dance. The beauty of what I experienced as a dancer and also as a choreographer, it forces you to be in that moment. I am there, you’re watching, you see it, then it’s gone, it sort of disappears into the ether. It is really about being in that moment, the present state. What’s cool is that when we do these events, at least for that moment, it changes people. To eat that food, to sit up on that hill and watch that dance, you walk away with this healing inside. The weird thing about the filming was to try to capture that moment, and then move it into a medium where it stays, where there is an artifact, where there isn’t in the live show.”

Julia retired from the San Francisco Ballet in 2002. She’d been dancing since the age of 13, when she studied with the National Ballet School in Toronto, and went on to the National Ballet of Canada, and then the San Francisco Ballet. Later, she turned her passion for dance to choreography. Place is an essential element of Julia’s work. She founded Julia Adam Dance in 2014 and eschewed the traditional stage. Since then, she’s made a point of staging her performances outside, first on a boathouse in Tomalas Bay with Dew Point, then moving inland to West Marin and on to Sonoma farms. Her choreography celebrates movement, married to nature and our place in it, with Mycelial Nature of Things, to the Elemental Series, including, Air in 2016, Solis (Fire) in 2017, and QuintEssence (the 5th element) in 2018, and sixes and sevens, last year, a reflection of the state of our world.

Dance companies aren’t alone in grappling with changes. Educational institutions are getting creative, too. Marina Hotchkiss, BFA Program Director, Dominican University, Alonzo King LINES Ballet said “While Zoomland created some opportunities to reach students, a complicating factor that became apparent was how students’ home situations totally determined what they would be able to do on Zoom, in terms of dancing. Many lacked an adequate amount of space to practice. So, there was a lot of inequity for students, as well as the faculty.”

Alonzo King is a choreographer, who is renowned for his ability to reimagine ballet. He’s been honored as a teacher and honored with the Lifetime Achievement Award by the Corps de Ballet International Teacher Conference in 2012. His Alonzo King LINES Dance Center of San Francisco encompasses a pre-professional training program, a summer program and the BFA Program at Dominican University of California. A direct relationship to choreographer Alonzo King offers Dominican students direct access to the philosophy, environment, and process, developed by one of today’s foremost choreographers.

“Over the summer, I feel I did eight different versions of the schedule. Everything kept changing. We are still in the process because we just finished our first week of the semester. I requested an exemption, so the dancers could live in the dorm and take classes and I would create outdoor spaces for them to dance outside together.

While the faculty was still on Zoom, the instruction was not face-to-face, because Marin County was not in phase 3, due to coronavirus levels. Hotchkiss promoted the creation of outdoor spaces but with the fires, they had to go back to their rooms and totally on Zoom. Eventually, as the air cleans up and the students are able to have the wonderful energy of dancing together again, they will still wear masks and be socially distanced.

Marina added, “Other modifications mean all the movements must be linear and upright, because droplets fall to the floor. No bare feet and we’re doing a lot of floor cleaning. This is pushing one’s creativity and problem solving.”

Marina and her department, due to COVID-19 concerns, opted for a final performance some of the instructors will be filming. They hope to do a performance in Angelico Hall, without an audience, that they would video or live stream. This will be a new experience for some.

While streaming or filming a performance is new to some, the elements of storytelling through filming is an essential element of Aaron Lucich’s work. However, filming a Julia Adam dance performance did present certain challenges.

Aaron said, “This will be an entirely different thing. The film and the dance reflect the times we are experiencing now. We usually have separate roles in our events, Julia choreographs the dance and I hold the larger container, but this time we actually collaborated on the story, co-directed. It was our first time collaborating and it was a little awkward at first. I was making sure there were no sharp objects around.”

They laughed and Julia added, “It’s funny because it’s usually quite a private exploration for me. And then, Aaron was kind of there and I had to learn how to collaborate a little better.”

Aaron said, “At some point, it just went off and became unilateral so I trust her as an artist more than anything, and I don’t know that I’ve grasped more than 60% of the story so I am curious to know what I am going to find as I edit.”

Aaron is also working with another company and they are facing the same dilemma. Do they play to a very small house, socially distanced, a house of 20, or do they film it and have a paywall for their subscribers? Some companies only charge a nominal fee and make it available to a wider audience through a screening, as opposed to someone having to buy a ticket and show up, which might actually prove to be more beneficial for them financially.

“I think it is forcing all of us to reinvent how we do it. But we are all kicking and screaming,” Aaron adds, “What we did is not just a video, but a factual narrative film that we might market directly to our audience, maybe through outdoor viewings or through Julia’s connections, she’s Canadian, we might be able to market it to Canadian Bravo. We are figuring out how many ways we can repurpose the content, besides just putting it on YouTube.”

Tuning in to See Dance in Marin

Here’s how Marin audiences can tune in to see great dance performances or engage with dance in Marin: