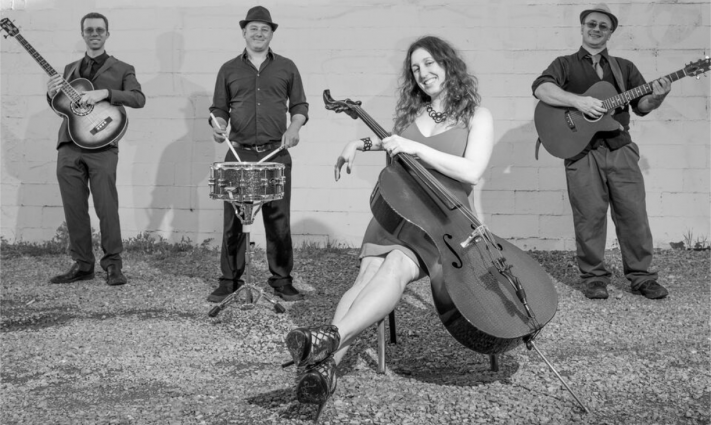 Dirty Cello has created “Rolling Roadhouse” to bring music into the community during the pandemic.

Life during a pandemic makes the Don McClean’s “American Pie” line about “the day the music died” feel woefully prescient. In the ongoing process to establish safe and viable ways for the art form to…

Life during a pandemic makes the Don McClean’s “American Pie” line about “the day the music died” feel woefully prescient. In the ongoing process to establish safe and viable ways for the art form to return, it has indeed felt at times like live music had befallen a premature demise. However, in lieu of a vaccine, there’s always the tremendous power of resiliency to remember as well.

For residents of Marin County, such innovation has taken several forms. Each is new and somewhat alien. If it makes for a potentially jolting compromise from the concerts of the “before times,” consider them not as a substitute but a necessary compromise instead.

Naturally, any of the below listings that actually include an audience component come with specific protocols and guidelines to follow. Please be sure you’ve read all details before making a purchase or committing to a plan – safety first!

With careful discipline, generous empathy, and a shared passion for a desire to hear songs played in an authentic setting, it does appear that music will live to see another day. Here’s what that looks like for now:

If you’ve got the means to pay for it, why not rent Dirty Cello’s Rolling Roadhouse and bring the concert to you? Now available for rent from the group (featuring San Francisco cello ace Rebecca Roudman), the package includes “a fully self-contained stage that comes with a full sound system and full lighting” and is billed as a solution for those looking to do “an outdoor house concert, drive-in concert, block party or a grand reopening.” Give a whole new meaning to the phrase “stringing your friends along” and support a local band in the process? Win-win!

HopMonk Tavern – Live in the Beergarden

A beer and the crackle of amp just go together, don’t they? Remind yourself of this winning combination with a visit to Novato’s HopMonk Tavern, where suds and socially-distanced tunes are back on the menu. Set in the venue’s outdoor beer garden, shows this summer have already featured the likes of Petaluma singer-songwriter Clay Bell, Walnut Creek singer-songwriter Chris Ahlman, and Tim O’Neil, (frontman of the titular Northern California string ensemble Timothy O’Neil Band). Information on upcoming Live in the Beergarden performances can be found at www.hopmonk.com/tickets.

John Olmstead is on a mission to bring a little joy to a very dark moment. His solution? The Backyard Sessions, an ongoing series of concerts streamed from a stage built in Olmstead’s backyard in San Anselmo. So far, the series has already featured over a dozen acts, including the Fairfax boogie/blues band Koolerator. Speaking with the Marin Independent Journal, Olmstead said his plan was to continue hosting performances “until the winter weather brings the curtain down on it.” For a listing of upcoming events, visit their Facebook events page.

If you’re missing both brunch and the prospect of some tasty tunes, it might be time to pay a visit to Rickey’s Restaurant & Bar in Novato. Over the summer, the American Farm Fresh cuisine eatery has been hosting poolside brunches from 11 a.m. to 3 p.m. on Saturdays on Sundays. Even better, there’s live music until 2 p.m. as well. Recent performers include Blind Date Trio and local guitarist James Patrick Regan. Those interested in attending a brunch are instructed to make a reservation by calling Rickey’s at (415) 870-2990.

Marin County has a rich legacy as a bohemian refuge for a generation of musicians. One such artist, Joan Baez, is directly connected to the Corte Madera nonprofit Bread & Roses, founded by Baez’s sister, Mimi Fariña. Though a musical talent in her own right, Fariña’s impact through Bread & Roses continues to bring live music to underserved populations. As of August, such work is taking the form of weekly live concerts each Saturday at the San Rafael warehouse of the San Francisco-Marin Food Bank. As reported by the Marin Independent Journal, “volunteer musicians from Bread & Roses perform while Marin families pick up their food.” Musicians performing have included Mitch Woods, Julia Harrell and Kurt Huget, Jeffrey Halford and Karen Drucker and Michael Hatfield.

Earlier this summer, residents of Sausalito gathered together for a most unusual concert: one of the floating variety. At the end of July, houseboat owners like Rusty Hendley and Tony Williams—who together own Wolf Island, a multi-story spectacle on the water – have been hosting the events at Waldo Point Harbor. During the performances, musicians like Sausalito singer-songwriter Damir Stosic and Joe Tate and The Hippie Voices are stationed on a floating deck with a socially-distanced, mask-wearing crowd watching from above. Some even attend via kayak, though details about any future events in the series are not publicly available at this time.

Live music is back — in a Marin backyard
By Paul Liberatore, Marin IJ