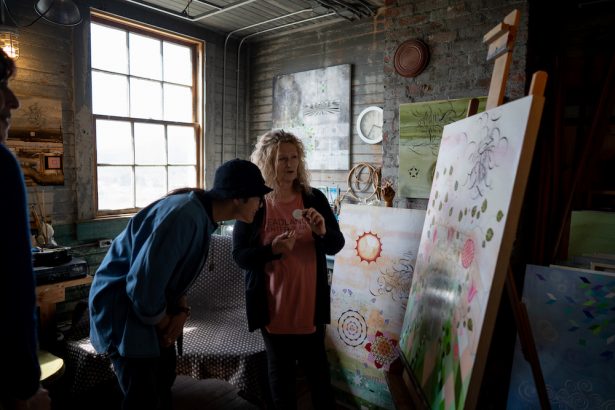 Headlands Residency Manager Holly Blake (right) speaks with a visitor about her work during Spring 2019 Open House. Photo by Tom Ide; courtesy of Headlands Center for the Arts.

A Place On The Edge Of The World

“In the early days, site-specific art was the thing,” Blake said. “We structured the residencies around the idea that artists would come here and be influenced by the environment: the military history, the architecture of buildings, nature or each other. We had big rooms, and many (artists) did installations that created an entire environment. They talk so much about immersive environments now, and it’s a throwback to that time.”

She added, “There were no fancy videos or techno displays. (Transforming a space) was done by sometimes altering the light, or by bringing in natural materials or working with the wall spaces in different ways. In those days, there was usually a wall of information that explained what in the world you were looking at because it wasn’t always apparent.”

Blake’s long experience with the Center gives her a unique perspective on how the studio practice artists-in-residency program has evolved over the decades. Just as artists and the art world evolves, the Center continues to meet changing needs. This is still the case. The Center’s Affiliate Artists Program, an immersive studio practice program awarded to approximately 20 Bay Area artists, writers, and designers annually, plans to end in 2021. Coincidentally, their Bay Area Fellowship (BAF) program applications are now open.

Born of the idea of transforming a military facility into an art center, Headlands Center for the Arts graces Marin County and the broader world with a place given to new ideas and the creative process. In the early 80’s, artists rehabilitated military buildings just north of San Francisco in the secluded ocean-side natural landscape of the Marin Headlands to conceive large, airy workspaces where ambitious installation art pieces could take shape. Entire rooms, meant to be occupied by installation art (whether studio or gallery space), encompassed visitors with a sensory experience, so they felt a part of the artwork.

Those large, often impressive, installations were not for sale but things changed. “As the art market picked up,” Blake continued, “we found that fewer artists were working on large installations. Artists were creating paintings and sculptures. They didn’t need big spaces, so we divided up some of the studios.”

Blake described more transitions, “The program began with mainly local artists in residence. When we went to an open application for artists worldwide, the Center came alive. It is also true that when I came on board, we didn’t have the dinners. We had loosely organized pot lucks, often forgotten, but when we hired a chef in 1992 to prepare meals five nights a week, the dinners brought everyone from all the programs together.”

In addition to artist residency programs, the Center supports interdisciplinary art with a variety of things happening. In non-Covid times, the Center hosts over 13,000 visitors in a wide range of programs. Public programs are often followed by dinner by the resident chef in the Mess Hall. During three Sunday afternoon open houses a year, the artists-in-residence open their studios to share their work. Some days a thousand people come through. The Center’s Graduate Fellow program has arrangements with seven local schools for a graduating MFA student from each school to have a studio space (they live off-site) where they can come and work and interact with a community of other artists and develop a network.

Sean Uyehara, Director of Programs, shared that about 70 interviews, including 35 or 40 artists, to help formulate a new 6-year plan revealed what the Center does best for artists: provide space and time, a cohort of people to interact with, financial support, and the cachet associated with the Center.

Uyehara added, about the new Bay Area Fellowship, “We intend to take all the things that the Center does well and amplify them, so it is deeply supportive in terms of money and resources. A yearly $15,000 stipend and health insurance are included in two-year fellowships. We will work closely with the artists to see what other resources they may need to tailor the fellowship to meet their specific goals at the end of their time here.”

One cohort of the Bay Area Fellowship will start one year, for a two-year period, then a second cohort will start the following year, so there will be some overlap of cohorts. The hope is that these cohorts will create connections, deepen their relationships with other artists, share ideas, and create a community of support.

Pre-pandemic, Blake most enjoyed seeing the artists (more than 1,600 over the years) interact, get to know one another, become friends, or even collaborators. She is often surprised to find that artists she thought, from their applications, might get along and create connections, don’t, and instead, ones she thought would find nothing in common end up fast friends and collaborating. “I love the unexpected things that happen. It’s my favorite part of the job!”