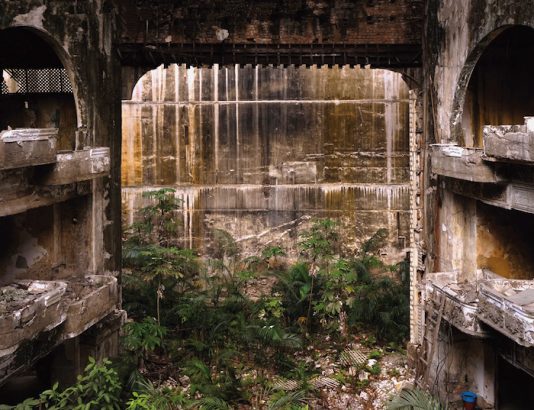 At Charles Anselmo's exhibition of new work of Teatro/Moto (at Gallery Route One in Point Reyes Station until March 28th), the large photographs printed on paper and 8-foot wide silks interpret the textured rubble of…

At Charles Anselmo’s exhibition of new work of Teatro/Moto (at Gallery Route One in Point Reyes Station until March 28th), the large photographs printed on paper and 8-foot wide silks interpret the textured rubble of a decaying and overgrown hundred-year-old, abandoned and ornate Teatro Campoamor in Havana, Cuba. As a connoisseur of ruins, Anselmo has provided a story back in time.

Standing in front of “Teatro Campoamor #24,” an Archival Print that measures 60 x 80 ins, is a front-row seat to the decaying performing arts center that later served as a parking garage and now is abandoned and without a roof. Anselmo captures the rich color tones of the rain-streaked, weathered rear wall of this enticing relic. Tropical palm trees grow where the stage once stood. These layers add to the textured, deconstructed landscape of historical fragments and skeletal details. Anselmo’s images of the historic monument’s faded interior and trespassing foliage seem to invite the viewer into Cuba’s colonial and ornate past.

Anselmo captures details of the Teatro and its history lovingly. His film fuses an aesthetic form with a social idea as a way of interpreting the past. As a visual witness to the Theatro’s history, one can envision going back in time and taking in the colors, senses, architectural ghosts, and symbolic richness of another time, which ultimately references how considering a memory changes our current perceptions of the past.

Fun Fact: Anselmo walked by the historic, larger-than-life antiquity the Teatro Campoamor, for fifteen years but could not enter until 2017, when he came upon caretaker Reynoldo.

What does this all mean? Anselmo sees that his work is concerned with the intersection of memory and social context. The images “embrace an attempt to fuse aesthetic forms with social ideas as a way of interpreting the past, photographically captured in the warm palette of decay. These social documentary images address the role of the human witness in an environment that has come to reveal the complex metaphors disclosed with a hidden world of remnants.”

While Anselmo has captured a varied body of work over the years, it is the island of Cuba that continues to lure him back, encompassing over seventy visits in twenty years and influencing 65% of his work. This current show at the GRO encompasses his most extensive portfolio to date.

Jennifer Wechsler is Curator for FAULTline Art Shows promoting and exhibiting emerging and established artists in unique spaces. She serves as an Art & Cultural Commissioner for Marin County and serves on boards at UCLA ARTS and The Oxbow School in Napa.