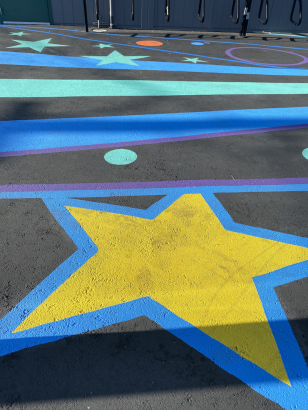 The courtyard shared by the New Media Learning Center and the South Novato Library is beginning to burst with colors. A stylized yellow painted sun in the center with books and boulders radiating outward on…

The courtyard shared by the New Media Learning Center and the South Novato Library is beginning to burst with colors. A stylized yellow painted sun in the center with books and boulders radiating outward on one side, and the painted symbols represent the galaxy from the other. The floor mural will be finished and unveiled in late June.

“A floor decoration system can have a delightful effect that is also meaningful and serves an educational goal,” comments mural artist Joel Yau. “Anyone can stop by to enjoy the experience, including students and community members picking up books at the library.”

“The different design elements will link to the augmented reality created by high school students,” comments John MacLeod, founder of The New Media Learning Center. “For example, an image of the galaxy will pull up phone-based graphic information about the universe or whatever augmented reality the student decides to create for the object.”

The New Media Learning Center’s XRMarin workshops for high school students are UC-approved classes on immersive design that offer elective credits through the Marin County Office of Education. The soon-to-be-announced summer series of hands-on, one-week workshops will enable students to do real projects using Virtual Reality (VR), Augmented Reality (AR), and 360-degree video production. The classes, offered in July, will be announced in late May and promoted on the Marin County Office of Education website and XRmarin.net.

“A floor decoration system can have a delightful effect that is also meaningful and serves an educational goal.”

The New Media Learning Center non-profit has been making technology accessible to Marin communities, focusing on youth, for over 30 years. John MacLeod, its founder,  is an educator and evangelist for XR technologies (Virtual Reality, Augmented Reality, and 360-video). MacLeod is also the founder of XRMarin, which teaches programs that have run locally through maker spaces and media studios, such as the training center in the Intel Computer Clubhouse and The Marin Youth Center (MYC). MacLeod’s XRlibraries program has set up local libraries in immersive technology titles and technology.  Marin residents interested in experiencing these immersive technologies firsthand can access the local library to check out both the augmented reality title and the headset needed for optimal viewing.

XRMarin’s in-person summer location is state-approved for 14 students of varying ages socially distant learning since they served as a learning hub during the pandemic. They will offer high school students three, free 6-hour classes.

While not in the traditional chalk used in the Italian Street Painting Festival, high school students also will work with artists Jones and Yau through June to fill in the courtyard design created by these expert muralists.

“Less is more was the design goal,” comments muralist Joel Yau. “The immersive experience of a ground mural is different from a wall mural because you need to walk up to each area to engage. In our design, the Solar system draws in viewers, and the waterways take them to the wall and connect the buildings in the complex”

The ground mural also has a hopscotch game and a labyrinth that invites visitors to figure out how to get to its center. Perspective angles create a robust design that pulls the eye into the elements representing the theme of STREAM, bringing learning to life.