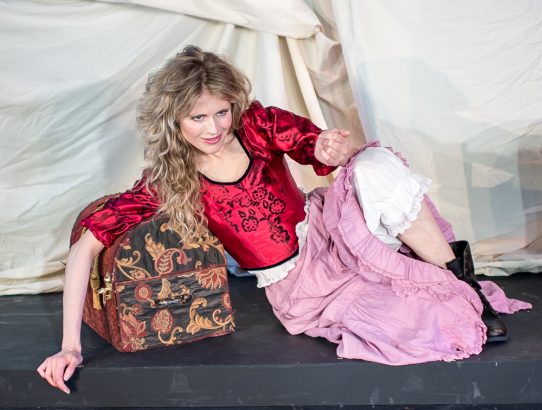 Two of Marin's Historic Community Theaters Survive Pandemic Bill Weinberg has been on the board of Novato Theater Company for the last six years and is now serving as President. An electrician by trade, his…

Bill Weinberg has been on the board of Novato Theater Company for the last six years and is now serving as President. An electrician by trade, his heart is dedicated to community theater. He shared how The Novato Theater Company’s big fundraiser, Sharing the Spotlight, planned for last year to commemorate the 100th anniversary, took place online instead of in person.

Weinberg explains, “The event celebrated everyone in Marin’s theater community — all the small organizations — because we all cross-pollinate, borrowing equipment, set pieces, costumes, and people who go back and forth between all the different venues. So, in celebrating 100 years, we wanted to recognize that we are simply part of a bigger community.”

The celebration of that more extensive community came simultaneously with a period of deep disappointment, an opening night followed by canceled shows, and a lost season. As a result, the Novato Theater Company opened and closed its most ambitious musical to date on the same night; the premiere of Tommy had a cast and crew of about 35 people.

Weinberg continues, “The musicians and performers sounded great. And I have to say, that evening was like flying and being stabbed in the heart at the same time. It was the most intense, contradictory feelings I’ve ever experienced at one time — elation and sadness — knowing it was our only performance.”

Vice President and Executive Producer of Ross Valley Players, Steve Price, shared similar frustration, “Early on in the pandemic, we prepared for opening, closed but hoped for reopening more than once, only to be disappointed. When it set in, we canceled productions and went dark.”

The good news is that ticket sales are beginning again, and auditions will follow later. Ross Valley Players will open with a comedy, and the Mountain Play will perform Camelot at The Barn because they won’t be opening on the mountain until next year. Then Ross Valley Players will present Sherlock Holmes and the Case of the Jersey Lilly. The Ross Alternative Works (RAW) production is next, and then the Government Inspector, a show done at the College of Marin (COM) a few years ago. Lisa Morris, head of the COM drama department, will direct that production. But these past few months were both business as usual combined with the highly unusual.

Even during a pandemic, finding the right script is at the forefront for community theaters. There is a small group of people reading plays for the Novato Theater Company. The group winnows the selections down to three or four, and then they’ll bring those to the board. From there, the board does its due diligence, reading the plays and choosing those to produce.

Weinberg recalled, “We did one a couple of years ago that I produced called The Humans. It took place in a two-story New York apartment that required us to build a two-story set which proved costly and complicated. We decided after that to keep things simpler with, for the most part, smaller casts. But we do plan to bring Tommy back to our stage; we hope this next season.”

Typically, Ross Valley Players dedicates a three-week run each season to new works from emerging Bay Area playwrights. Ross Alternative Works (RAW) is continually receiving new scripts, reading those, and deciding which ones to present as readings, either on stage when they can or on Zoom as they have this past year. Those readings may move a play to full production. Packrat Gene is the show that will get a full presentation next Spring because they canceled it in 2020.

For the rest of one of the Ross Valley Players’ regular seasons, a play reading committee will continue to review published plays. That committee ultimately selects a production that will work at the space at the Barn. A good fit means that their patrons will enjoy it. They look for plays that may offer new ideas or diversity and also sell tickets. A good fit is essential for a community theater’s specific audience, especially now, since they lost one and a half seasons.

Ross Valley Players had found great plays, but then they had to cancel seasons. They plan to revive the canceled plays with the hope of opening in September.

Canceled plays led Ross Valley Players to put past productions online for patrons to enjoy in their RVP Encore Series. They chose those with no copyrights associated with them, like Shakespeare, Gilbert & Sullivan, or permission given, like Jennifer Le Blanc’s adaptation of Moll Flanders.

And really, hat’s off to our patrons and everyone who donated to Ross Valley Players. That extremely helpful stream of cash kept us afloat.

Novato Theater Company attempted to offer live fundraising events with actors performing from their homes on Zoom. The rehearsals were terrific, but the internet doesn’t always provide the same experience twice. They encountered dropped frames, freezing, garbled sound, and other issues during the actual virtual event.

Weinberg admitted challenges, “The wonderful thing that came out of that first attempt was an outpouring of support from people. They were making donations and pledges, and it gave us heart that we could make it through this, and we have.”

In the Fall, Novato Theater Company put on another fundraiser, “Fright Night.” This time everyone sent in a recording, and it proved to be a much better product with a live host at the theater and two actors performing a skit. These learnings meant later fundraisers worked. The Valentine’s “Celebrate Love” event featured couples performing duets. In April, the last show featured musician Jake Gale and singers Daniela (Dani) Innocenti Beem and Julie Ekoue-Totou performing “The Dynamic Duet.”

Like many theaters, Ross Valley Players qualified for low-rate loans, which helped them get through the difficult times. But individual donor support efforts were critical.

“And really, hat’s off to our patrons and everyone who donated to Ross Valley Players,” comments Vice President and Executive Producer, Steve Price. “That extremely helpful stream of cash kept us afloat. It costs us about $7,000 a month to have the building. That is with nobody in it. Just being dark is still costly.”

Luckily, the roots of community theater run deep in Marin. As theaters went dark in early 2020, these two well-loved theater companies reached significant milestones before the shutdown and are still with us today. Novato Theater Company celebrated 100 years by exploring the world of virtual performance and online fundraising. The Ross Valley Players marked 91 years with streamed performances, a newly negotiated lease with the Marin Art and Garden Center, and a lobby redesign. They can still say they are the oldest continually operating theatre company on the West Coast.

There are myriad ways to connect with other through community theater.  Of course, they need actors and writers, as well as patrons and audience members. But many volunteers are also needed to help with hospitality, construction, production jobs, costumes, and so much more.  Visit our Stage listings to stay connected to theater arts in Marin.