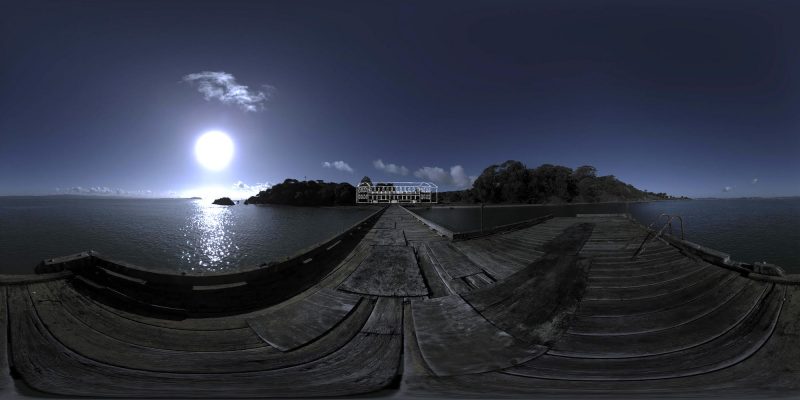 A short ferry ride from Tiburon lands visitors at the former site of the Angel Island Deportation facility, which was built in 1910 to enforce the Chinese Exclusion Act. The historical park now features a…

A short ferry ride from Tiburon lands visitors at the former site of the Angel Island Deportation facility, which was built in 1910 to enforce the Chinese Exclusion Act. The historical park now features a 360-video short called Pacific Gateway by Marin resident and filmmaker Felicia Lowe that shares the history and poems of Chinese who passed through the island during the Chinese Exclusion Act period.

Like many Chinese who passed through Angel Island, Lowe’s parents were a “paper son” and “paper daughter” when they traveled to America from China in the early part of the 20th century. The lack of proper identity documents made it particularly difficult for those traveling from China. Lowe’s parents, and many others, had to purchase false identities that they maintained for all or a good portion of their lives. As a result, Lowe and her family, like other descendants of “paper people,” knew very little about their parents’ lives before coming to this country.

Lowe is a television producer and filmmaker whose 40-year career as a storyteller has focused on the Chinese American experience. Many of Lowe’s projects take the viewer on her journey of discovery as she learns more about her family history. Her career has had three acts. She started reporting 90-second stories as a broadcast journalist and then produced longer journalism and documentary films. Her documentaries, Chinese Couplets, Carved in Silence, Chinatown, and China: Land of My Father were aired on PBS and used for education in the classroom. The third act has been making short films for museum exhibitions.

“I like making 2-minute videos that capture the attention of a kid running around on a field trip,” said Lowe. “The film needs to capture their imagination and have a takeaway. I like that challenge. Since I’m a grandma, I want to make films that appeal to the broadest audience.”

For over 40 years, Lowe has donated her time and skills to the Angel Island Immigration Station Foundation because she believes in the importance of preserving and restoring this National Historic Landmark. Her father and grandfather came to America through Angel Island. Like all of Lowe’s short films, the film at the Immigration Station focus on a few characters that illustrate the human side of immigration, the stories of those who take a risky voyage to America to escape war, famine, and starvation.

“My films are very personal to me, but they are universal,” said Lowe. “Like many American families, their immigrant ancestor came looking for a better life.”

According to the Angel Island Immigration Station website, the facility processed immigrants from the Punjab, Russia, the Philippines, Portugal, Australia, New Zealand, Mexico, and Latin America. It also served as an entry point for Jewish people fleeing Nazi rule in Germany, Austria, Poland, Hungary, and Czechoslovakia. But it was the Chinese coming to America who suffered many hardships due to a lack of proper documentation and a downturn in the local economy that led to the Chinese Exclusion Act.

“We’ve all come in the same boat. We’re all the same. It doesn’t matter your color or where you come from. I think that realizing this is the value of what film can do, what art can do.”

Lowe’s main characters suffer through long waits and interrogations on Angel Island. INS (Immigration and Naturalization Service) knew about the paper sons and daughters, people who had bought identities to fit into the narrow definition of who could be allowed to come into this country. The arriving Chinese could be on Angel Island for several weeks if the testimonies were taken locally, or even up to several months to years if the applicant was rejected and appealed the decision. The length of stay varied for travelers from other countries; Japanese immigrants held documents provided by their government that sometimes expedited the process of entering the country. Thus, the majority of the detainees were Chinese. Agents interrogated them during the day to confirm they were the person they claimed to be on paper.

“Protest came in the poems carved into the walls,” said Lowe. “I think it was one of the few ways they could express themselves in the quiet of the night. Exclusion meant being under the microscope.”

Those who made it through the interrogation process and allowed entrance to America then worried. Like Lowe’s own family, the “paper people” always maintained secrecy about their true identity to protect everyone within the community.

“There were secrets and silences in families. These immigrants tried to live a life that was invisible, so they didn’t rock the boat,” said Lowe.

May 6, 2022 will mark the 140th anniversary of the adoption of the Chinese Exclusion Act, which was repealed December 17, 1943. Lowe thinks that, in recent years, one immigrant group gets pitted against another. She hopes that her stories tap into a universal human experience of the immigration story.

“We’ve all come in the same boat,” said Lowe. “We’re all the same. It doesn’t matter your color or where you come from. I think that realizing this is the value of what film can do, what art can do.”