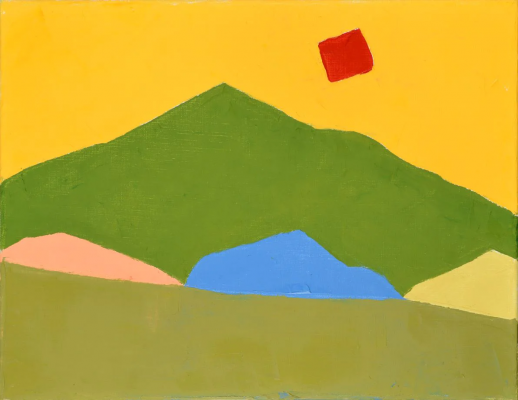 Marinites traveling to Amsterdam this summer will be pleasantly surprised to see vibrant paintings of Mount Tamalpais in the "Color as Language" exhibition at the Van Gogh Museum through September 4, 2022. The exhibit features…

Marinites traveling to Amsterdam this summer will be pleasantly surprised to see vibrant paintings of Mount Tamalpais in the “Color as Language” exhibition at the Van Gogh Museum through September 4, 2022. The exhibit features 78 paintings by Etel Adnan alongside ten of Vincent Van Gogh’s works.

Born in Lebanon in 1925, Adnan studied in Paris at the Sorbonne when she was 24. Then, she moved to the United States for graduate school and settled in Marin County for 50 years.

Adnan’s obituary in The New York Times in November 2021 shared how the artist died in Paris at 96 years old as a globally celebrated and prolific creator. Her novels, essays, and poems were in multiple languages and often about conflict and war. By contrast, her paintings and tapestries were abstracts in bold and cheerful colors, inspired by the colors of Van Gogh’s paintings.

Adnan began exploring visual arts as part of her creative expression at 34 years old, but her career as a painter began to take off when she was 86. In addition to the Van Gogh Museum, SFMOMA, Guggenheim Museum, Documenta, New Museum, Whitney Museum of American Art, Museum of Modern Art, MassMOCA, and many more, have exhibited her paintings.

Here are three interesting points to share about Adnan, including some information about her roots in Marin County:

(1) Adnan began painting when she joined the staff at Dominican College in San Rafael, CA (now the Dominican University of California) to teach French and Philosophy from 1958 to 1972. Once at Dominican, Adnan (age 34) met Mill Valley artist Ann O’Hanlon, founder of the art department and today’s O’Hanlon Center for the Arts.

In the SFMOMA’s exhibition video called “Etel Adnan: Painting and Poetry,” the artist shared how perfect timing brought her from poetry to painting in one day when O’Hanlon’s sharp blue eyes caught her off guard. The two women met near the art department on campus. Adnan taught the philosophy of art, called aesthetics. O’Hanlon asked if she painted, and Adnan responded, “No, because my mother said I was clumsy.” To which O’Hanlon replied, “And you believed her?” She gave Adnan a corner of a studio and some pastels, which Adnan held flat and rubbed on the paper, which later led to her technique of painting in broad strokes using a palette knife. Adnan had her first solo show at the O’Hanlon Center’s Gallery in 1961.

(2) Like many Northern California artists, Mount Tamalpais was Adnan’s muse. Adnan painted the view of Mount Tamalpais from her window in her Sausalito studio and from memory when she left Marin.

The exhibition at the Van Gogh Museum features five leporellos, including “Journey to Mount Tamalpais” (2008), a vibrantly illustrated work to which Arabic text has been added.

“Once I was asked in front of a television camera: ‘Who is the most important person you ever met?’ and I remember answering: ‘A mountain.’ I thus discovered that Tamalpais was at the very center of my being,” Adnan said in excerpts from this leprorello shared online during an SFMOMA exhibition.

(Sotheby’s describes leporellos as accordion-style sketchbooks inspired by the Japanese concertina-like books of folded paper into which she combined drawings with the written word. A 2015 The Paris Review story provides more information about her leporellos.)

(3) Adnan believed color was how nature communicated. She looked to Van Gogh as a role model for using color to depict nature. The catalog of the Van Gogh Museum exhibition features one of her last interviews and shares her thoughts about color and how Van Gogh’s work influenced her.

“It’s colour that makes us realize the intensity of nature.” – Etel Adnan