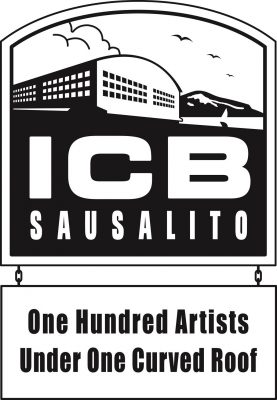 The landmark ICB (Industrial Center Building), located in Sausalito’s historic Marinship District, was built in 1942 as part of a large shipyard complex during WWII. The ICB was known as the “Mold Loft” because it was where the templates and mock-ups were made in order to fabricate the raw steel for the workhorse Liberty Ships.

Beginning in the 1950s artists were attracted to its big open spaces, natural light and cheap rents. Today it is known for the three floors of artist studios. There are over 85 artists working in a changing variety of mediums including oil and acrylics, pastels, egg tempera, clay, fiber, photography, jewelry, sculpture, and digital media. Many of the artists exhibit locally and some show their work nationally and even internationally.

Since 1968, the ICB artists have welcomed the public to come into their working studios during the Winter Open Studios event in held during the the first weekend in December. Open Studios offers a unique opportunity to meet the artists and talk to them about their creative process and their art. In addition to selling artwork, some artists do commissioned work and some offer to teach privately or in a workshop.