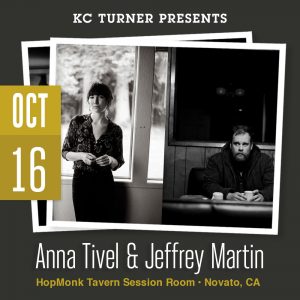 Somewhere deep in the middle of a good story, a simple and powerful thing happens.

Anna Tivel reaches for that thread of understanding with her music, that moment of recognition, of shared experience.

There are thousands of miles on her touring odometer and each town is a tangled web of heartache and small reasons to believe. She gravitates toward the quiet stories of ordinary life.

A homeless veteran sitting on a bench to watch the construction of a luxury hotel. A woman wondering about the life of the daughter she had to give up for adoption. Someone changing shape, someone falling in love, someone all alone.

“Tivel’s characters are both common and unforgettable,” Ann Powers of NPR writes, “She possesses a genuine poet’s sense that words matter more than persona, or a showy performance. Her images linger, and become populated with the energy of the real.”

With three full-length albums out on Portland’s well-loved Fluff & Gravy Records and a fourth due out this April, Tivel continues to touch on a common human thread. Her latest release,  ‘Small Believer’ was heralded by NPR as an “album that repeatedly achieves this exquisite balance of the quotidian and the sublime.” Her newest album ‘The Question’ was recorded mostly live at Hive studio in Eau Claire, WI, engineered by the esteemed Brian Joseph (Bon Iver, Sufjan Stevens)  and produced by drummer and multi-instrumentalist Shane Leonard.

As a babe Jeffrey Martin sought out solitude as often as he could find it.  He’s always been that way, and he has never understood the whole phenomenon of smiling in pictures, although he is a very happy guy.

One night in middle school he stayed up under the covers with a flashlight and a DiscMan, listening to Reba McEntire’s ‘That’s the Night that the Lights Went Out in Georgia’ on repeat until the DiscMan ran out of batteries.  That night he became a songwriter, although he didn’t actually write a song until years later. After high school he spent a few years distracting himself from having to gather up the courage to do what he knew he had to do.

Eventually he found his way to a writing degree, and then a teaching degree.  He wrote most days like his life depended on it, all sorts of things, not just songs, but songs too.  He fell in love with teaching high school English, which was fantastic because he never thought he’d actually come to truly love it.  His students were fierce and unstoppable forces of noise and curiosity, and for all that they took from him in sleep and sense, they gave him a hundred times back in sparks and humility.

All the while he was also playing truckloads of music.  Jeffrey Martin tours full time now.  He is always making music, and he is always coming through your town.  He misses teaching like you might miss a good old friend who you know you’ll meet again.

He currently lives in Portland, OR but feels lately that it has become a secret that someone figured out how to monetize.  And since he has no money of any kind, everything beautiful about the city is marred by the quiet ticking of a countdown toward the day that he’ll have to find somewhere to live that doesn’t require a steady bleeding fortune.