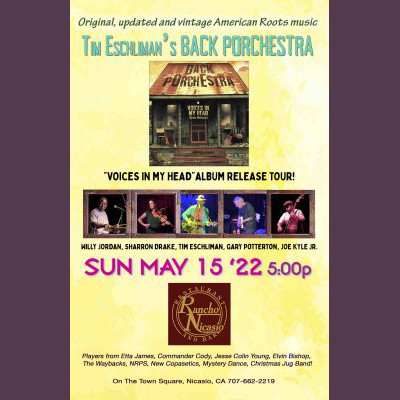 Back pOrchEstra at Rancho Nicasio

Gestated during the locked-down summer of 2020, Back pOrchEstra, a collection of all-star West Coast musicians, announces a Bay Area-wide spring tour in support of its debut album Voices in My Head (Genre Whiplash), which is enjoying several weeks on the Alt Country Specialty Chart.

With time on his hands due to the Pandemic’s pause on live music shows, Back pOrchEstra founder Tim Eschliman found ample time to craft original songs, bring together a combination of old and new cohorts, and also assemble curated historic covers that incorporated his many musical influences (roots rock, Americana, country blues, western swing, indie rock, Louisiana and Irish music) from four decades of playing and touring.

The album is available now on all music streaming platforms and is available for purchase on USB Music Card and CDs at all upcoming shows, local record stores, Amazon, and on GlobeRecords.com. Physical CDs, and links to MP3 or WAV files are available upon request for review and airplay.

Jeff Burger from Americana Highways calls Voices in My Head an “…excellent album …evokes artists from multiple decades over the last century and embraces everything from indie-rock and Americana to Celtic, Motown, and Western swing.”

Calvin Powers from Americana Music Show says “Subtitle of this album is Genre Whiplash, and I get it. You get everything from alt.rock to cajun, to country, to Brownie Ford era Western Swing. But the thing that keeps this set together is their excellent songwriting full of smooth never-miss-a-beat lines and vivid imagery.”

While Natasha James for Country Music News International states “…the beautiful and timeless rendition of ‘Allons A Lafayette’ by Back pOrchEstra, stands out as a harkening back to the stripped down, front porch family picking style straight out of the country shacks of Louisiana and Appalachia in the 1920’s.”

For the latest info on the Back pOrchEstra, tickets and more, please visit our website.

See our calendar of upcoming shows in the North Bay 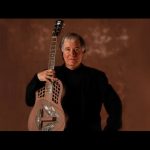 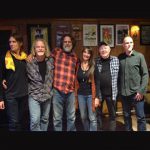 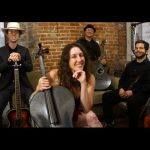 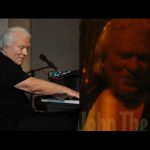 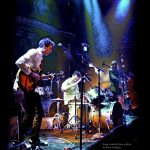