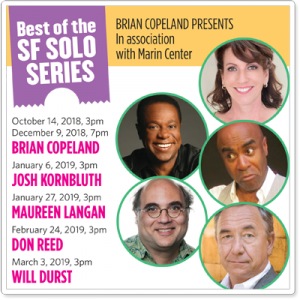 For the second year in Marin County, Brian Copeland will present Six of the Bay Area’s most critically-acclaimed, award-winning, and beloved solo shows for an exclusive run at Marin Center

Brian Copeland Presents in partnership with Marin Cultural Association, are thrilled to present The Best of San Francisco Solo Series.

This show is an unrelenting look at a ten-day period in Copeland‘s life—the mandatory ten-day waiting period before he could lay his hands on the newly purchased gun with which he planned to take his own life.  Even in the midst of this tragedy, however, his wonderful sense of the comedy of life does not desert him (how much should he spend on the gun?), indeed serves him insidiously well as a buffer against the grim reality of his intention.

In this hilarious and heartwarming prequel to his hit show “Not a Genuine Black Man,” beloved actor-playwright Brian Copeland recounts two memorable weeks as a six-year-old when he took to the “mean streets” of Oakland to buy his mom the perfect Christmas gift.

Josh, a hapless slacker who hasn’t filed his tax returns in seven years, meets Sara, a beautiful public school teacher. When Sara gets pregnant, she insists that they be married by the time their baby is born, but she won’t marry Josh until he solves all his terrible tax problems!

“Daughter Of A Garbageman” is a tale of Maureen Langan‘s 1970s upbringing in New Jersey. Her Irish mother and Bronx-born father, a New York City sanitation worker, told her to work hard, get educated and life would reward her.  Not true!  Life is rewarding reality stars.  With humor, honesty, and insight, Maureen taps into the hearts and frustrations of hard-working people everywhere who wonder if they, too, were raised wrong.

The piece chronicles the true story of Reed‘s collegiate and Tinseltown misadventures in the electric-pink ’80’s. As the awkward son of a pimp struggling with college and a merciless Hollywood, Reed tried being a stripper and a gigolo, but ended up as a live-in waiter at an unforgettable retirement hotel—breakfast-sandwiched between the elderly, employee drifters and drug-addicted dreamers.

Fresh from the national tour of his award- winning, hilarious chronicle of the changes in America during the Time of Trump, comedian, columnist, actor, author, former margarine smuggler, Will Durst is proud to announce he’s updated his hysterical, historical “Durst Case Scenario” with a colon and a subtitle: “And They’re Off.” 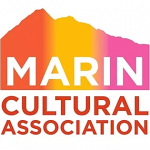