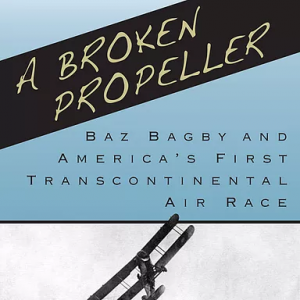 A Broken Propeller is a true adventure story of America’s first coast to coast air race, engagingly told by the daughter of one of the participants.

In October 1919 fifty nine planes flying in open cockpit planes with no parachutes, competed in a long distance round trip race that began simultaneously in San Francisco and Long Island.

Planes battled rain, fog, snow and ice. There were forced landings, crashes and fatalities. Betty Goerke’s father was one of only eight who completed the race.

Betty Goerke, a Mill Valley resident since 1962, is on the Board of the Mill Valley Historical Society. She taught anthropology and archaeology at College of Marin for over 30 years and is the author of “Chief Marin: Leader, Rebel and Legend,” and “Discovering Native People at Pt Reyes.”