Brown v Board: Reflection of Justice & Equity in honor of Juneteenth 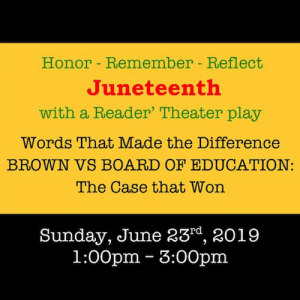 Thought provoking Readers’ Theater that highlights the courage behind the unanimous Supreme Court decision to end segregation. What did it take to win?

Join us for this heart-opening Readers’ Theater on the 65th Anniversary of Brown vs Board of Education.

We remember the courage of the Little Rock Nine and one of our Hero’s of Forgiveness Melba Beals and her steps to end segregation; joined with the efforts of Supreme Court Justice Earl Warren.

We are excited to have a special guest reader: the Grand-daughter of Supreme Court Justice Earl Warren.

BROWN VS. BOARD OF EDUCATION: Words That Made a Difference is Readers’ Theater with music, which uses the exact words from the Brown courtroom and the words of Supreme Court Justice Earl Warren, to shine a light on individuals, ideologies and the transformative words which made a difference in the lives of African American children.

Celebration ends with “Four Women” – a tribute to Nina Simone: Revolutionist singer of the Sixties, and this song depicts the slave names by which women of the time were labeled.

Dr. Cindy Acker, Ed.D. is a published author and playwright She is Head of a Montessori preschool through middle school in Alameda, one of 8 schools which she has founded. She served as consultant and policy adviser for schools in California. 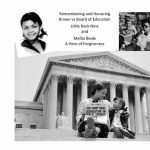