Concert on the Green: Dennis Johnson and the Mississippi Ramblers 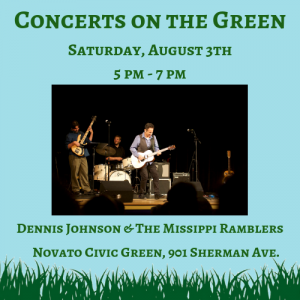 San Francisco native Dennis Johnson is one of the virtuoso slide guitar players performing today with a deep passion for preserving and innovating roots music.

Dennis and his band, the Mississippi Ramblers, deliver standout live performances of stellar roots and Americana music, rockin’ blues, and New Orleans grooves. The band brings audiences to their feet at festivals, theaters, and concert series.

Dennis has been described as a “Slide Guitar Master” by Guitar World Magazine.

“Rhythmland is a modern masterpiece… done with power and an incredible degree of passion.” – Reflections in Blue Magazine.

“5 stars out of 5 …one of the best albums of the year in any genre.” –Hot Wax Magazine

“This guy is up there in the pantheon of outstanding purveyors of the slide guitar tradition.” -Blues Blast Magazine

“Slide guitar master Dennis Johnson leads us on a breathless tour …in the land of rhythm.” -Living Blues Magazine