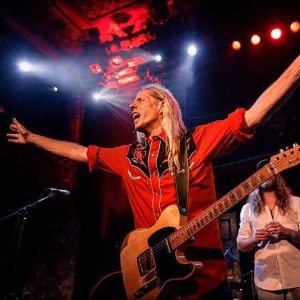 That changed when Click’s CD, Life Is A Good Place, was released in April, 2011 and spent more than 12 consecutive months on the Country, pop, and Americana radio charts.

Click and his band The Hell Yeahs, featuring a round-robin roster of top-shelf musicians, have played more than 200 sold-out shows over the past two years, as well as opening for legends Taj Mahal, Cake, Robert Plant, Mavis Staples, Sonny Landreth and JJ Cale.

What’s causing all the buzz? First, there’s Click’s sound – a refreshing return to smart, sassy blues-inflected country rock. Think Tom Petty crossed with Wilco, spiced with the southern tradition of Lucinda Williams and John Hiatt. Add to that Click’s searing guitar, reminiscent of Stevie Ray and David Lindley, and you’ve got at least part of the picture.

Then there are Click’s live shows; an anything-can-happen mix of stellar songwriting alternating with blistering blues-rock. When Click brings it down with the strings-inflected “Blue Skies”, you can hear every breath in the room; when he launches into the infectious “Wait My Turn,” there’s not one person who can stay seated.

Lastly, there’s his songwriting. Continuing in the tradition of the Texas greats, Click pens wide open songs deeply rooted in a life well-lived. Growing up in a small farm community outside Indianapolis, Click was the youngest of nine children in a working class family. He was gigging in his older sister’s country and western band before he was out of high school.