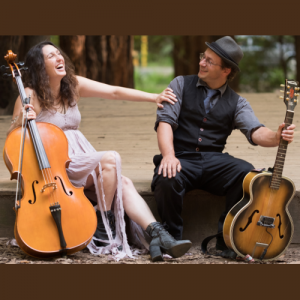 The blues and bluegrass band Dirty Cello is an internationally touring 5 piece band who play over 100 shows a year.

Stuck at home now, 2 members of the band, Rebecca Roudman (cello/vocals) and Jason Eckl (guitar), who are also married to each other have decided to create an online progressive concert.

Starting March 20, they began live streaming each night at 8:00 pm for 1 week, 2 songs from their extensive repertoire.

At the end of the week, they compiled these 14 songs into a concert video.

They plan to keep this up during the stay-at-home period, as close to every day as possible.

Note: as of April 18, Dirty Cello will perform Facebook Live events more sporadically, so check here for their schedule.

Check out the band as they careen from stompin’ blues to frenetic bluegrass to some cello-centric rock covers. When they’re not busy doing these livestreams, the duo is catching up on a large number of recording projects since this is the longest amount of time they’ve been off the road in years.

The livestreams were found here:  Facebook.com/dirtycellomusic