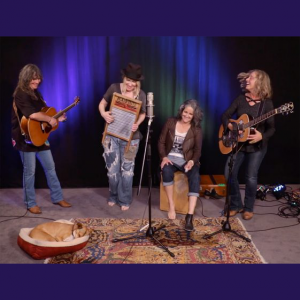 From two folk-rock duos, one impressive quartet ranging from tender to raucous

Duo Quartet – the truth is, this is a band that wasn’t supposed happen.

It started with four old friends thinking, ‘hey, let’s do a couple of shows as a double-bill’: Nina Gerber & Chris Webster in concert with The Pam & Jeri Show (Pam Delgado and Jeri Jones of Blame Sally).

Given that all four women already had stellar reputations in the greater Bay Area, it wasn’t hard to book some high profile venues followed by full houses.

From an audience point of view there is something richly satisfying in experiencing these four women onstage with a dynamic ranging from tender, ethereal songs to raucous barn-burners.  Webster and Delgado sing most of the leads – Chris often expertly playing a washboard while Delgado drives the band with her percussion.

But if this were a boxing ring you’d see coming in from opposite corners the dueling energy of Jones and Gerber egging each other on with their guitar-Goddestry – whipping the band and the audience into a veritable frenzy.

With a beautiful set of original music mixed with surprisingly original takes on a few choice covers, Duo Quartet brings to the stage a band that is greater than the sum of its already impressive parts.