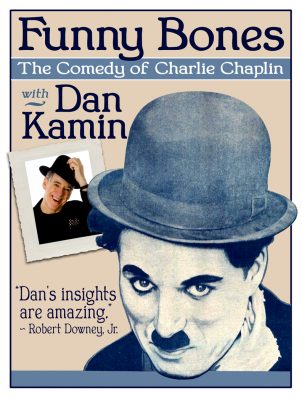 More than 100 years after his film debut, Charlie Chaplin is still making audiences laugh, and Dan Kamin, physical comedian and Chaplin expert, is here to show us why. In a funny and insightful presentation incorporating live performance, Kamin will screen a restored version of Chaplin’s 1916 gem The Pawnshop and then lead the audience in peeling away its layers to reveal surprising secrets. You’ll learn all about Chaplin’s remarkable body language and brilliant visual comedy, and you’ll enjoy some terrific physical comedy and sleight-of-hand from Kamin himself.

Dan Kamin is a theatrical comic who performs internationally in solo shows and as prankster-in-residence with symphony orchestras. He trained Robert Downey Jr. for his Oscar-nominated performance in Chaplin and created Johnny Depp’s comedy moves for Benny and Joon. He won’t just change the way we look at Chaplin’s world, but also the way we look at our own, in this family-friendly program.