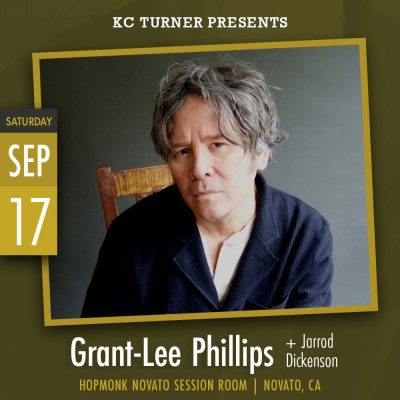 An evening with a master tunesmith full of eloquent character

When you’re a musician used to a certain creative groove, it’s disorienting to have this rhythm disrupted.

But that was just the position Grant-Lee Phillips found himself in spring 2020: Months before the release of a new full-length, Lightning, Show Us Your Stuff — an album he was already previewing on an early 2020 tour with John Doe and Kristin Hersh — the pandemic led to the cancellation of tour dates and other promotional plans.

Like many musicians, Phillips sought out silver linings wherever he could find them. He started performing weekly at-home livestreams, dubbed Live from the Parlor, and promoted Lightning, Show Us Your Stuff from his house in Nashville.

But in early 2021, when Phillips realized any potential touring options were still on hold for the foreseeable future, he started to write and record a new solo album at home. “I found respite in the process when I could do little else,” he says. “It became a sort of meditation on this time in my life and the events that we’ve collectively experienced.”

The resulting full-length, All That You Can Dream, is understandably introspective, as it’s anchored by Phillips’ empathetic voice and rich acoustic guitar.

The album’s lyrics attempt to make sense of an uncertain, anxiety-riddled time, while coming to terms with the idea that once-unshakeable things now seem fragile or fallible.

All That You Can Dream is also rife with Phillips’ signature songwriting flourish: using rich historical references to illuminate modern truths. “I’m always juxtaposing the events that we’re all going through with similar events in history—sometimes laying one over the other to draw a comparison, to find parallels, to seek out patterns,” Phillips says.

In a nod to lyrical elegance, All That You Can Dream’s music is ornate but spare. Phillips wrote and arranged the album’s songs on guitar or piano, adding a basic rhythmic and vocal framework.

To flesh out the music’s contours, he then enlisted a pair of trusted previous collaborators, the Los Angeles-based bassist Jennifer Condos and drummer Jay Bellerose.

“I know that I have to bring my A-game when I work with them,” Phillips says. “That’s a personal thing where I feel like I don’t want to bring them my sketches—I want to bring them something that I feel really strongly about. I know they’ll be very respectful, and they’ll inspire me as well.”