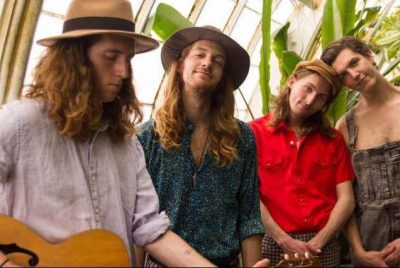 San Francisco’s premier vibrational connectors, Hibbity Dibbity have been forging their way into public consciousness since 2012. These “Swamp-funk” pioneers were baptized in the barrel of the blues, and carry forth the spirit. As Mary Lindsay Dickinson, mother of the North Mississippi Allstars describes, “a classy blues strut mixed with 22nd century push!” Hibbity Dibbity’s second album, “Tinctures, Potions & Elixirs”, is a swamp-stompin’ odyssey; a concoction of psychedelic rock and roll blues described as “Swamp Funk.” Recorded in 3 days at Jim Dickinson’s Zebra Ranch in North Mississippi, “Tinctures, Potions & Elixirs” captures the band’s raw, live sound. Much of the album was written while on tour in the Summer of 2014, and the songs introduce the myth of a telepathic prophet, the Bellyman. With “Tinctures, Potions & Elixirs”, Hibbity Dibbity surges forward into new sonic portals, leaving a trail of heavy vibrations in their wake.