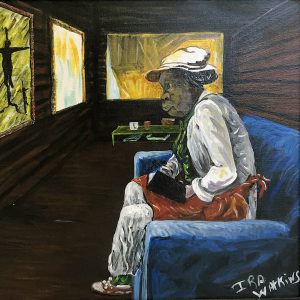 Painter Ira Watkins (American, b. 1941) is largely self-taught. Watkins has drawn over a 40-year career on themes of the African-American experience, notably the Bay Area community that migrated from the South during WWII to find work in the shipyards.

His’ iconic depiction of the people, places, and events that have touched his life has helped to reshape the commonly held narrative of Black America, while his straight-forward paint handling has helped bridge the gap between 15th-century European art forms and current painting modes. Watkins has been described as “flipping the script”, both on traditionally held white social hierarchies and on contemporary art iconographies.

Watkins’ exhibition history includes over 30 gallery and museum shows. His paintings on canvas and board have been exhibited in the Asian Art Museum, The Tenderloin Museum, and the University of California, along with a number of mural projects from San Francisco to Waco, where January 17th is officially designated as Ira Watkins Day in honor of his mural of Martin Luther King Jr. delivering his iconic “I Have a Dream” speech. He is currently artist-in-residence at San Francisco’s Hunter’s Point Shipyard. 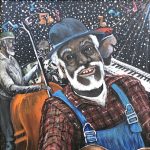 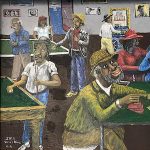