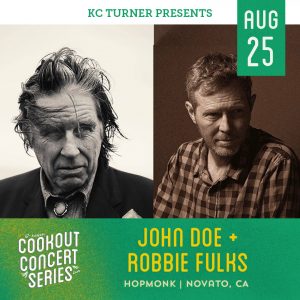 One night. Twice the music.

John Doe was born in 1977 when he arrived in Los Angeles. His previous life in Tennessee, Wisconsin & Baltimore was a great & fertile time but new music and social changes led him to events that created a life in art.

John met Exene Cervenka at the Venice poetry workshop Nov 1976 and he started working with Billy Zoom around the same time. When DJ Bonebrake joined X in mid-1977 the line up was complete. They released six studio records, five or six singles and one live record from 1978-1993.

He has recorded 8 solo records w/ numerous renowned singers and players, more recently including Patty Griffin, Dan Auerbach, Aimee Mann, Don Was, Kathleen Edwards and Greg Liesz. Other musical side projects include work with the Knitters, Jill Sobule and The Sadies.

Robbie Fulks is a singer, recording artist, instrumentalist, composer, and songwriter. His most recent release, 2017’s Upland Stories, earned year’s-best recognition from NPR and Rolling Stone among many others, as well as two Grammy® nominations, for folk album and American roots song (“Alabama At Night”).

In 1983 he joined Greg Cahill’s Special Consensus Bluegrass Band.  His early solo work — Country Love Songs (1996) and South Mouth (1997) — helped define the “alternative country” movement of the 1990s. His music from the last several years hews mainly to acoustic instrumentation; it returns him in part to his earlier bluegrass days, and extends the boundaries of that tradition with old-time rambles and sparely orchestrated reflections on love, the slings of time, and the troubles of common people.

As an instrumentalist, he has accompanied the Irish fiddle master Liz Carroll, the distinguished jazz violinist Jenny Scheinman, and the New Orleans pianist Dr. John. He tours yearlong with various configurations.