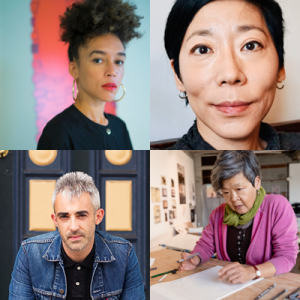 Online open studios with Headlands Artists; drop-in from wherever you are via Hopin

We miss open studios: the informal conversations about process and practice, bumping into someone you know, the serendipitous connections that arise in the buzz of ideas and aesthetics.

We’re hoping to capture that buzz in an online open studios event with Headlands Artists, and we invite you to drop-in from wherever you are.

Register now, and on the day-of you’ll be able to pop-in to virtual rooms via Hopin to chat with Artists, and each other.

Danielle Dean (AIR ’20, ’21), an interdisciplinary artist whose image and installation-based work stems from deep research into the subjective, collective, and historical constructions of objects and ephemera.

David de Rozas (AIR ’20, ’21), an Emmy-nominated filmmaker and multi-disciplinary artist, and recent recipient of a VIA art award. De Rozas’s films, which often confront colonial histories, have screened around the world; he is in the process of completing several new works.

This event is free, registration required