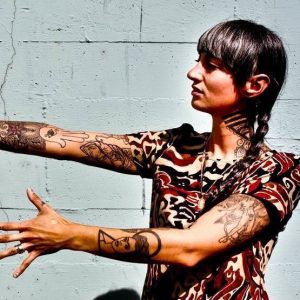 Throughout Y La Bamba‘s fourth album Ojos Del Sol, frontwoman Luz Elena Mendoza returns to themes of searching and metamorphosis. From the intimate, contemplative verses of the Spanish-language title track to the revelations delivered over the loping beats of “Ostrich,” this is an album that’s painstakingly produced while remaining emotionally raw.

On one level, this is born from her continuing exploration of her identity as Mexican woman. Both of Mendoza’s parents grew up in Mexico—Luz was born in San Francisco, then brought up in a strict Catholic household in Southern Oregon.

She spent her childhood summers playing in the orchards of California’s San Joaquin Valley with her cousins, and it was there that she soaked up the melodies and stories that were being told through traditional folk songs with three-part harmonies. These are sounds that remain a vital building block of the songs on Ojos Del Sol, an album which she says represents “a celebration of family and community.”

But on another level, Ojos Del Sol is about Luz’s search for shared humanity outside of her own community, and for a faith that is greater than just religion. These are songs built to soundtrack coming to grips not just with one’s own mortality, but with the fragility of the world. This is heady, emotional fare, and “this record is about being a mother to these emotions,” Mendoza says.

Sea of Bees is the musical project of Julie Ann Bee, or Jules as everyone calls her. She sings, writes the songs, and plays lots of musical instruments.

“If I had to sum her up in a sentence, she’s sort of a female Sparklehorse. Her music is rooted very much in folk and rock but wildly experimental; some crazy, beautiful, wonderful sounds on her new album “Songs for the Ravens.” On my top 10 for the year.” -Robin Hilton, NPR radio host 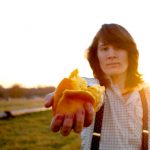