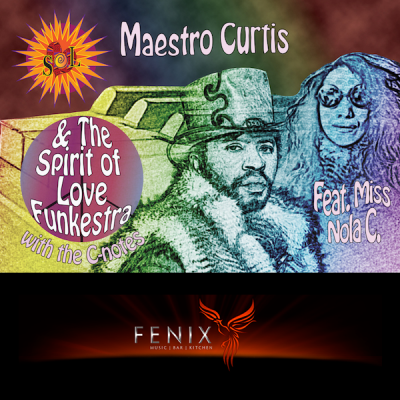 Maestro Curtis, Bay Area musical legend, vocalist and multi-instrumentalist, Grammy nominee, former Kalimba Records Recording Artist, protégé of the late Maurice White (founder/lead singer of Earth, Wind, & Fire), and best-selling author, of The Art of Producing, brings his brand of Bay Area and World Funk to Club Fenix with his band S.O.L. (Spirit of Love) Funkestra, featuring the vocal stylings of Miss Nola C., of whom many have said to be carrying the torch in the tradition of Patti Labelle, Chaka Khan, and Ella Fitzgerald.

The group is in the midst launching their debut CD, entitled, Chronicles of the Spirit, including the first hit single, “Power”. Maestro and his band are already being hailed as the, “Second Coming of Sly and the Family Stone and Earth, Wind, & Fire”. S.O.L. Funkestra boasts a who’s who of accomplished musicianship, from the E-family on percussions, the inimitable Mr. Juan Escovedo, legendary guitarist and vocalist from the famous Stallings family, Mr. Neal Stallings, and at the helm and head of the horn section, trumpeter, multi-instrumentalist and long time Johnny and Shuggie Otis music director, Sir Larry Douglas. Another featured act, making their debut, from the C-Family, will be Maestro and Nola’s children and protégés, The C-notes, a musical band and vocal group. Zahara (13), Nile (12), Isis (10), Kiki (9), and Phoenix (7). Also joining them on piano from the legendary Merl Saunders (Grateful Dead) and Eddie Mo’ Moore (Drum legend) bloodline, Ms. Journey Rae Moore-Prewitt, a piano/music theory student of Maestro Curtis.

This night’s performance will prove to be a family affair and a veritable funk fest!