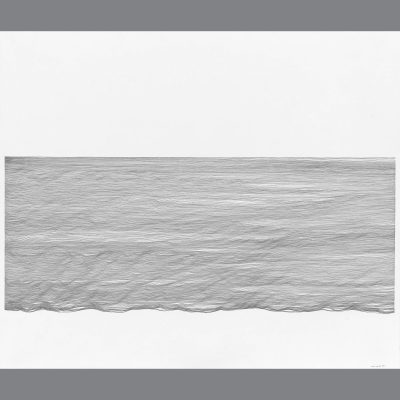 For her second exhibition, entitled The Sea, each of the nine drawings deliberately have no focal points. A type of silent meditation can occur as one encounters the drawings. Meditation is achieved through an attempted release of focus and is an important practice for the artist.

When this series of work is viewed as a whole, it is meant to evoke an experience of being near the ocean – observing the juxtaposition of the harmonic uniformity of the sea with the void produced by sky and earth. The titles of each piece, personal dates or numbers to Johansen, are meant to mean nothing to the viewer, which further encourages the release of intentional thought and imposed meaning-making.

Working only in natural light from a studio on the Bay, Johansen meticulously draws with one pen at a time, one line at a time, one drawing at a time – never overlapping – until a drawing is complete. Johansen is attempting to establish order out of impression, pacify chaotic urges and delineate emotion through process. She believes in the importance of craft and in the abstraction that making art allows.

Johansen studied at the University of Southern California’s School of Architecture and has taught Graduate and Undergraduate art and design at The California Polytechnic Institute and The University of Southern California. Johansen is driven in her practice – rooted in a strong work ethic, formal discipline and technical skill. Her mother, an American textile designer and consultant for the United Nations, met her father, a Norwegian engineer who designed railway systems in Asia, while working in Pakistan. That was where Johansen was born and raised until they moved to a farmhouse in Vermont when she was five to be closer to family. Growing up in a household that was frequently visited by her parent’s friends from all over the world, including her mother’s circle from the Black Mountain College scene, led her from a young age to appreciate the cultural arts.