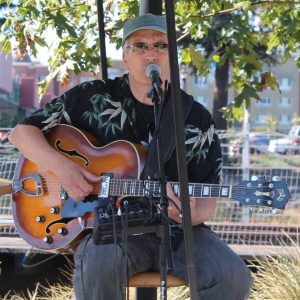 Although he started as a trumpet player (which he gave up because he couldn’t talk, let alone sing, while playing), he switched to bass, and then guitar.

Playing in Bay Area bands early in his career, he had the opportunity to back such acts as The Whispers, The Pointer Sisters, and Johnny Taylor.

Mike Z has written original tunes for film and TV libraries, and performed on numerous studio tracks. He currently appears in the bands Z and The Benders and the Mike Z Jazz Trio.