Presented by We Players at Showcase Theater, San Rafael CA 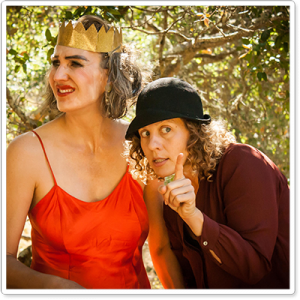 Mother Lear is a moving production about a middle-aged woman who navigates dementia with the help of her daughter – communicating only through the language of Shakespeare’s King Lear.

Cordelia and her irascible mother, a former Shakespeare scholar and proud matriarch, confront dementia, loss, and fraught family dynamics armed only with humor, compassion, and the poetry of Shakespeare’s words as the two struggle with aging, love, and their own balance of power.

This potent new two-character play is immediately followed by a facilitated discussion exploring themes of aging, dementia, caregiving, and end of life.

This tight 50 minutes of fiercely original theatre is created and performed by Courtney Walsh (‘Lear’) and We Players’ Artistic Director, Ava Roy (‘Cordelia’). The performance serves as the first act of the evening, a facilitated discussion with the audience follows as our Act Two.

This production is presented in the Showcase Theater Plaza.

We Players presents site-integrated performance events that transform public spaces into realms of participatory theater. We bring communities together, reclaiming local spaces for public discourse and civic celebration through art. Extending the transformative powers of performance beyond the stage, we invite our collaborators and audience to engage fully and awaken to the spectacular world around us.