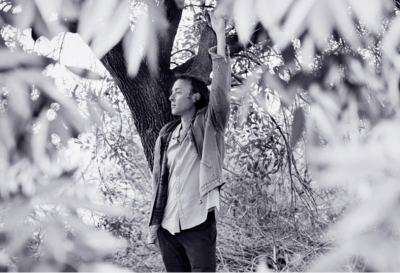 Come on down, kick your feet up and enjoy an intimate night of ‘indie folk magic’ featuring three distinct and talented songwriters of the new folk movement. Recent Point Reyes transplant and the force behind New York based Here We Go Magic, Luke Temple, will be performing stripped-down versions from his latest release, A Hand Through the Cellar Door. Of Temple, Rolling Stone says, “…His high-pitched voice recalls a young Graham Nash by way of Elliott Smith…has enough understated soul to give Connor Oberst a run for his money.” The New York Times adds, “Mr. Temple isn’t part of any particular school — not even that all-purpose new songwriters’ catchall, freak-folk — and his private world is fascinating.” These are big songs of intimate and intricate proportions filled with nuance, subtle surprises and sung with a roar barely louder than a whisper. Temple’s music sneaks up and works its way into you….slowly, and you truly won’t realize this until you’ve heard him and find yourself absentmindedly thinking about his songs for many days afterward.

Fresh from her recent performances at The Freight & Salvage, Slim’s, and Hardly Strictly Bluegrass Festival, Petaluma’s own Ismay will be opening the show with Portland based songstress, MAITA. Sometimes dreamy and ethereal, and at other times more straightforward with a hand tugging gently upon the reins of tradition, Ismay’s songwriting showcases her true love and the full range of influences that comprise the broader spectrum of folk music. Her’s is an enchanting yet direct voice that makes the old sound new in an ageless kind of way, and performs with a maturity that leaves plenty of space for her songs to weave, breathe and take over a room.

Listening to MAITA’S music is like stumbling across a collection of someone’s personal letters in a forgotten corner of some random antique store and having each one of them sung only to you. Her songs are intimate but reveal themselves in an unassuming way that makes you want to take your time with each one. She is currently on tour and stopping at Ink Paper Plate in support of her debut EP, Waterbearer, engineered by John Askew (Neko Case) and features Dave Depper (Death Cab for Cutie, Loch Lomond), & Matt Berger (Laura Gibson).

Individually, we like ‘em all. Collectively, we’re lucky to have all of them playing for you in one show. But you gotta feel it for yourselves, so come on down for an easy and entertaining night among friends and let us know what you think.

Hope to see you!

($10-$15 donation requested. As always, ALL proceeds from door go directly to the artists. We believe this is the best way to ensure a healthy and lively arts scene for all of us in West Marin.)