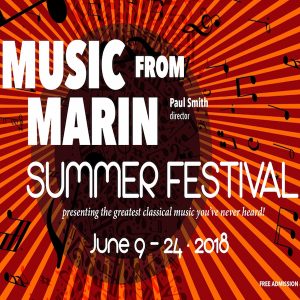 The 5th annual Music from Marin Summer Festival presents music from Vienna, home to both masters of the past and more recent times

A chamber concert for instrumentalists, singers, and dancers. The period of 1919–1934 is referred to as Red Vienna, a time when a democratically elected Socialist government improved the lives of a majority of its citizens, without diminishing the quality of life of the elite.

The great tradition of high art was continued by Franz Lehar, Anton Webern, Fritz Kreisler, Alban Berg and Eric Wolfgang Korngold, while a new style of serious music meant to reach the masses was furthered by Hanns Eisler and Wilhelm Grosz.

The London based piano duo of Valeria Szervánszky and Ronald Cavaye return to Marin to perform Franz Schubert’s masterful Fantasie, D940 and Johannes Brahms’ own arrangement of the finale of his second symphony, as well as smaller solo works by the 20th Century masters Arnold Schoenberg and Anton Webern.