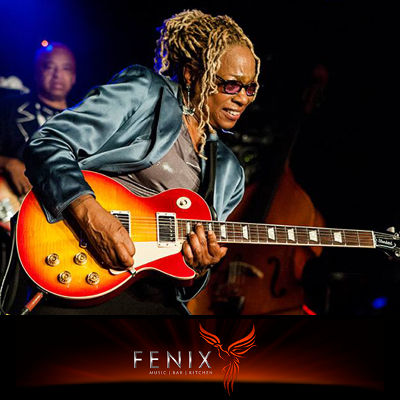 Wilder began playing the guitar as a teen after her mother encouraged her to develop an interest in any other instrument besides the drums that she was currently pursuing. Because music was prevalent in her household, her earliest musical influences came from Wes Montgomery and Taj Mahal. As a friend of the family, Taj Mahal provided the ultimate inspiration in her childhood—her first guitar.

As Wilder’s confidence grew in her guitar-playing ability, she ventured into singing. She truly enjoys performing as an expression of universal communication, and desires her audience to feel, hear, and see all she communicates through her music.

Described as “one of the most exciting Blues guitarists and vocalists to come out of the Bay Area in a long time” by Lee Hildebrand of the San Francisco Bay Guardian, Wilder has shared her talent with many great musicians, including Linda Tillery, John Lee Hooker, Jr., Angela Bofill, and many others.

When performing, Pat Wilder’s ambition is to feel the electricity and energy exchanged between herself and the audience. When you hear her, you, too, will be energized and completely captivated by Wilder’s unique Funk rhythms.